- Canadian CPI and retail sales data this morning may finally give pause to the torrid Canadian Dollar rally.

The US Dollar has sunk into its lowest levels since August 2016 as the Euro surge following the European Central Bank rate decision yesterday has continued. With the Euro now at a two-year high versus the US Dollar, the DXY Index (being comprised of 57.6% Euro) has been punished.

The market reaction to yesterday's ECB meeting was notable for a few reasons. First, in a lower volume, thinner liquidity environment - part and parcel of summer trading - it's hard to put too much stock in any one move; participation is too low.

Second, European government bond yields fell around ECB President Mario Draghi's press conference - from Germany to Italy - which runs counter to the price action seen in the EUR-crosses. Typically, the Euro (like all other major currencies) follows short-term interest rates, so a decline in 2-year yields across the region would suggest a drop in the Euro (this obviously did not happen!).

Third, it seems as if the market has its mind made up about the ECB tapering; or rather, the dovish tendencies Draghi exhibited yesterday were nothing more than a distraction. Market participants know the ECB will run into issue limits and capital key problems if it doesn't taper, so suggestions otherwise are farcical at best. 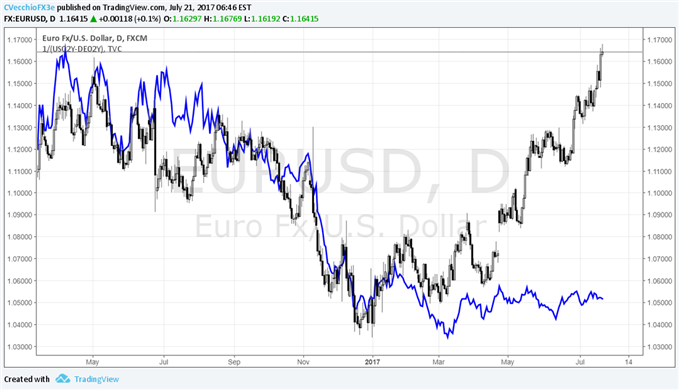 Between the largest net-long Euro position in the futures market since May 2011 and a rather large divergence between the US-German 2-year yield spread and EUR/USD, it would appear that the Euro is getting into fundamentally overbought territory versus the US Dollar. For now, though, EUR/USD remains technically well-supported, with bullish momentum firmly to the topside; it's still too early to call the top.

See the above video for a technical review CAD/JPY and USD/CAD ahead of Canadian CPI and retail sales data today, as well as the DXY Index, EUR/USD, GBP/USD, USD/JPY, AUD/USD, AUD/JPY, Gold, Crude Oil, and US yields.