- US Dollar remains under pressure, but with 'high' rated events on the economic calendar, there are few if any catalysts for a reversal.

- Both the BOJ and the ECB will be watched for their tone: just how dovish will the BOJ be?; and just how hawkish will the ECB be?

- See our long-term forecasts with the DailyFX Q3'17 Trading Guides.

Amid a quiet economic docket that won't see one 'high' rated event this entire week, the US Dollar's decline continues. Absent data catalysts that could spark a turnaround, the greenback is left adrift at sea, set to go wherever the winds of other currencies blow its sails.

While the calendar in general is quiet today, attention should immediately turn to Asia overnight when the Bank of Japan is meeting. Similarly, the European Central bank is meeting tomorrow as well. With speculation over central bank policy changes being a dominant theme in FX markets at the current moment, the BOJ and ECB meetings are sure to drive volatility in the Japanese Yen and the Euro, respectively.

To no surprise, the Bank of Japan rate decision is expected to see rates remain at -0.10% with the 10-year JGB yield target unchanged around 0%. In order to boost inflation to a stable, target, level of 2%, the BOJ controls short-term and long-term interest rates via market intervention, while the central bank has also committed itself to increasing the monetary base until inflation hits target.

Consumer price inflation in Japan rose 0.4% in May 2017, in-line with market expectations but still well-below the BOJ’s +2% target. Expect the BOJ to retain the mantle of ‘most dovish G7 central bank’ for the foreseeable future. In turn, this could reinvigorate weakness for the Japanese Yen: AUD/JPY and CAD/JPY are both poised for further gains if so. Otherwise, should the BOJ disappoint dovish expectations, GBP/JPY may be the most primed for a pullback. 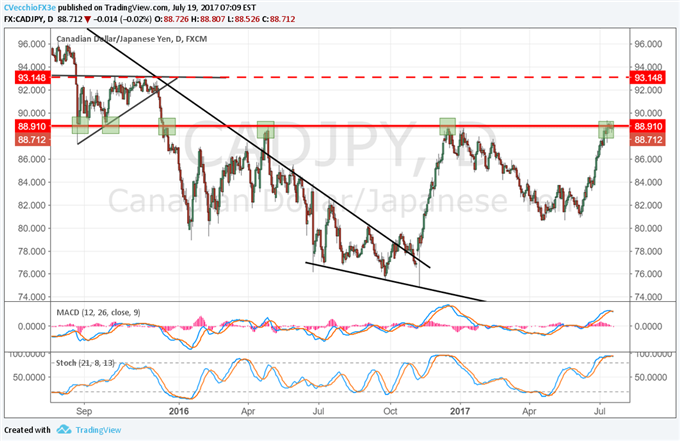 Perhaps more important later on Thursday, the ECB will meet. A lack of new staff economic projections (SEPs) should keep a lid on interest rate speculation around the meeting; indeed, Bloomberg News surveys show no economists expecting a rate move.

For now, it seems officials are suggesting that a step down in the QE program could come as soon as September. The key point is that it’s just not going to be this week. Due to the fact that the ECB is one of many central banks that have fallen into a predictable pattern of when policy action is most likely to arrive – only when forecasts are updated – this means that September or December will likely be when any significant issues are raised.

As a result, with the ECB set to keep rates unchanged, traders should be focusing on President Mario Draghi’s press conference for clues as to what the central bank will do next. A few more months of a stronger Euro, weaker energy prices, and persistent underperformance in inflation readings, and it’s easy to envision the ECB taking issue with the market’s hawkish interpretation of the policy adjustments being made.

See the above video for a technical review of the DXY Index, EUR/USD, GBP/USD, USD/JPY, USD/CAD, AUD/JPY, CAD/JPY, Gold, and Crude Oil.