Gold, Yen Gain Steam as US Dollar Falls Further Out of Favor

- Gold, the US 10-year Treasury yield, and the Japanese Yen have all moved in lockstep for the past month.

- If the Conservatives win an outright majority on Thursday, several GBP-crosses could rally - looking at GBP/AUD and GBP/USD.

- Retail crowd positioning shows that traders are net-long the US Dollar versus the Euro, British Pound, Japanese Yen, and Australian Dollar.

See the DailyFX Webinar Calendar for all upcoming strategy sessions.

The US Dollar (via DXY Index) briefly touched fresh yearly lows today as market participants weigh weakening US economic data on one hand versus "high" rated event risk on the calendar through the rest of the week. Concurrently, as was the case several weeks ago, the lack of movement along the fiscal policy track by the Trump administration continues to be an albatross around the greenback's neck. More weakness may be coming.

Thursday is a 'super Thursday' of sorts, with the ECB's June policy meeting, the UK parliamentary elections, and the James Comey testimony to Congress. Two days removed, it appears these events will fall squarely against the US Dollar. The ECB is likely to 'talk up' the Euro-Zone economy at the coming meeting, issuing more optimistic economic projections and potentially a shift in language in the policy statement. UK election polls have narrowed in recent days, but it looks like the Tories will walk away with a majority in parliament. Former FBI Director Comey seems poised to speak of meddling in the investigation of potential Trump campaign staffers colluding with Russia.

For the US Dollar: a more optimistic ECB could translate into a stronger EUR/USD; a Tory majority in parliament could restore sentiment of a 'soft Brexit,' and help lift the British Pound; and the Comey testimony will likely breathe life into renewed allegations of interference, which will sap more of the Trump administration's time away from crafting legislation. Thursday could be a rough day, depending on where you stand. 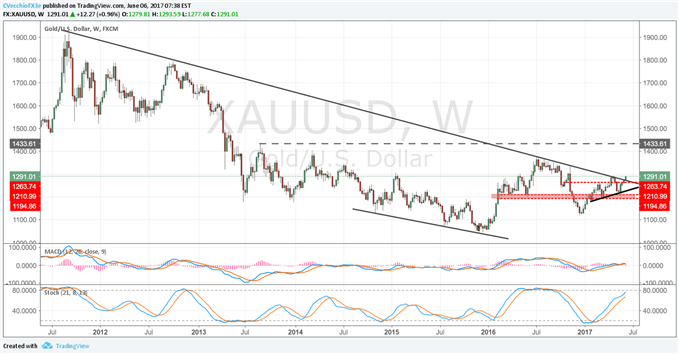 Ahead of time, it appears the US Dollar has already started to fall out of favor in the safe haven space. US 10-year Treasury yields have slipped back towards their yearly lows, pushing up demand for both Gold and the Japanese Yen. Gold is at an increasingly important area, attempting to break through the trendline going back to the September 2011 high.

Given how Gold, US yields, and the Yen have moved in lockstep in recent months, it seems highly likely that any further Gold strength or weaker US yields or a stronger Japanese Yen will come in tow with the other two instruments following - look for further movement in unison from all three. This speaks poorly of the US Dollar's position right now, which has nearly wiped out of all its gains since the first week of November 2016.

See the above video for technical considerations and levels to watch for in EUR/USD, GBP/USD, AUD/USD, USD/JPY, Gold, US 10-year Treasury yield, and DXY Index.