FX Markets Tilting Towards Safety Ahead of Good Friday

- The upcoming long weekend, against the backdrop of rising geopolitical risk, may see traders take shelter in the Yen and Gold.

- The crowd is both net-long USD/JPY and net-long Gold - seemingly conflicting positions as the Yen and Gold have moved together recently.

Nearly midway through a holiday-shortened week, traders may find themselves taking increasing 'safe' positions as geopolitical tensions build in Europe and the Middle East. With markets closed across the developed world for Good Friday this week, it seems unlikely that market participants will be overtly committed to staking out a significant position in any major currency.

This has translated into the DXY Index running into and turning away from trendline resistance, and EUR/USD rallying off of triangle support (both pairs are swinging away from trendlines established at highs/lows in mid-January and early-March, which is no surprise as the Euro accounts for 57.6% of the DXY Index). As discussed in yesterday morning's note, while USD-pairs find themselves at various inflection points, there doesn't seem to be a strong enough catalyst to get past the consolidation thresholds and into breakout territories.

Instead, for the remainder of the week, it seems that rangebound conditions across the majors should be anticipated, as even a calendar dotted with significant events has thus far yet to elicit a strong reaction. Typically, around holidays, particularly when non-market/geopolitical risks are rising, traders begin to take shelter in safe haven assets like Gold or the Japanese Yen. Put simply, no one wants to be caught holding the bag of risky assets when they won't be at their trade desk for an extended period of time.

Gold, the Japanese Yen (inverse USD/JPY on the chart below), and US Treasury yields (10-year inverted on the chart below) have been moving in tandem for the past several sessions - particularly since the March 15 FOMC meeting. As it goes, until US yields increase again, it seems unlikely that USD/JPY will be able to find much traction higher; and in turn, it means that Gold should remain supported in the near-term. 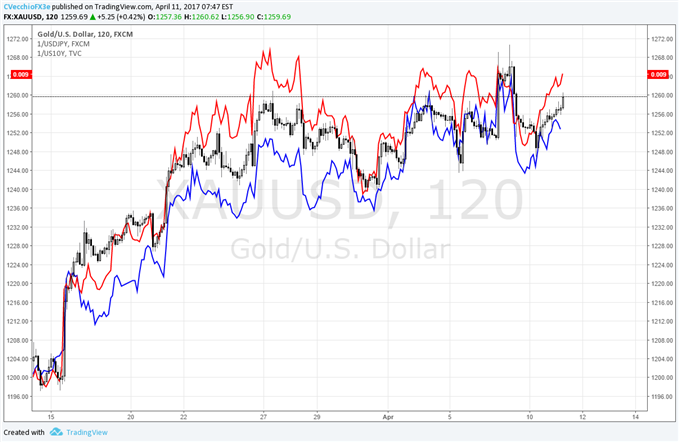 See the above video for a technical review of the DXY Index, EUR/USD, GBP/USD, USD/JPY, and Gold.