- Positioning bodes mostly well for the US Dollar, with the crowd net-long AUD/USD, EUR/USD, and GBP/USD at the start of the week.

A decidely confusing March US labor market report has done little to derail the US Dollar's rebound through the first part of April. Although the headline NFP figure was much lower than anticipated (even when taking into consideration that a giveback period was likely after unseasonably warm weather in January and February), other aspects of the US labor data have put market participants' minds to ease: the unemployment rate fell to a cycle-low of 4.5% thanks to the Household Employment Survey showing that +472K jobs were added last month.

As traders work their way through the data dissonance and emerge on the side that, in aggregate, the March US labor report should just be another brick in the path to the Federal Reserve raising rates again in June, interest rate expectations have started to climb higher. This time last week, Fed funds futures contracts were pricing in around a 55% chance of a rate hike in June; now, they're pricing in a 65% chance. As per the FOMC minutes released last Wednesday, it appears the Fed feels comfortable looking through any weak figures in Q1'17, and instead will proceed with raising rates in June and September, before pausing to begin the unwinding of their balance sheet come December. 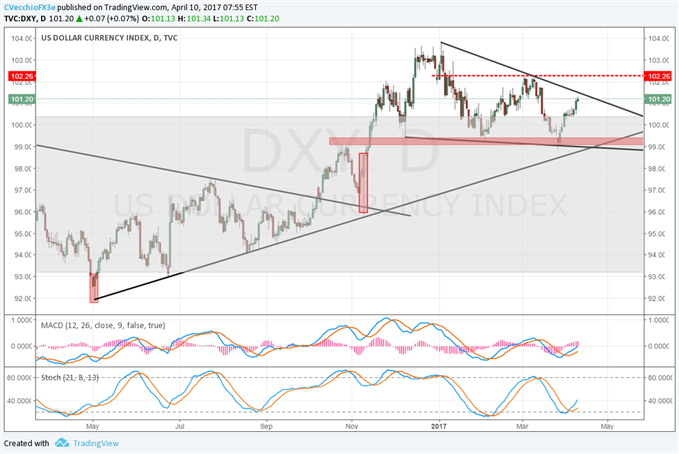 Now that some recalibration is being done on the US Dollar's side of things (especially as US Treasury yields stabilize and turn higher anew), focus at the start of the week is on factors that are driving other major currencies. 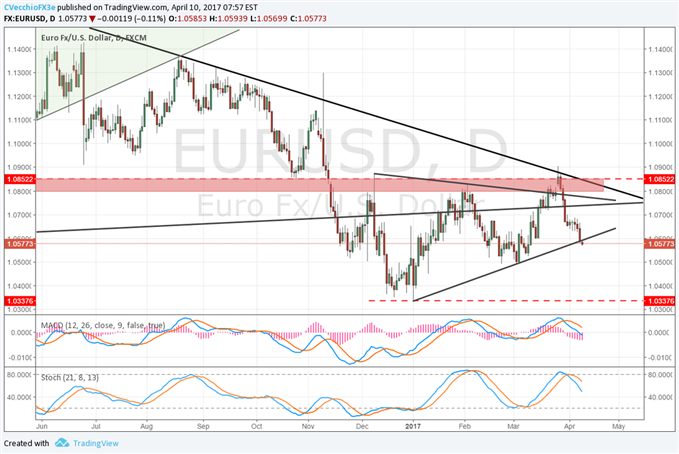 For EUR/USD, the combination of inflation expectations dropping (justifying the ECB's pushback against the market's interpretation of their March meeting) and French election currents shifting has been enough to seen the pair drop below the trendline from the January and March swing lows. For GBP/USD, concerns that high inflation expectations won't materialize ahead of tomorrow's UK CPI report - and thus the BOE won't hurry to raise rates - are weighing on Cable the past few sessions. 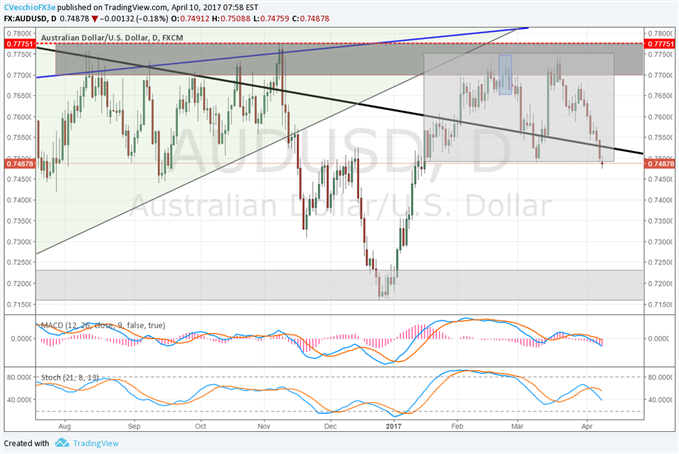 For AUD/USD, the swift fall in iron ore prices means a double top may come into play that could see price down to 0.7230 over the coming weeks. Finally, for USD/CAD, the recent rally in oil prices coupled with better Canadian labor market data has insulated the pair from greenback strength otherwise.

See the above video for a technical review of the DXY Index, EUR/USD, GBP/USD, USD/JPY, USD/CAD, AUD/USD, and Crude Oil.