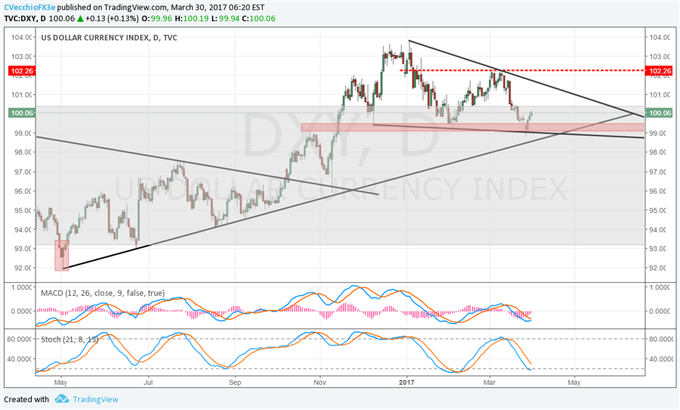 - Despite Brexit headlines, GBP/USD is rather unappealing - no directional move in sight in the near-term. The crowd remains slightly net-long GBP/USD.

Earlier this week, we wrote that the US Dollar needed a lifeline to help stall its recent tumble onset by the Federal Reserve (failing to upgrade their growth and inflation forecasts) and US President Donald Trump (not being able to push through healthcare reform).

On the US' side of the equation, there have been a few crumbs thrown the greenback's way: Fed speakers have been optimistic that more tightening is a certainty for 2017; tax reform and infrastructure spending bills may be around the corner; and healthcare reform might not be dead after all (which, for budgetary reasons, is an important cog in implementing tax reform).

Yet the past 24-hours have also seen some help come from endogenous sources. In Europe, 'unnamed sources' from the ECB have come out and said that markets had misinterpreted the tone of the March ECB meeting, that Draghi was not intending to come across as 'dovish with a hawkish twist' - that there was no hawkish twist.

Backing up the commentary has been a swath of weaker March inflation readings, implicitly suggesting that the ECB would want to keep its foot on the loose monetary policy accelerator in the near-term. In conjunction, these factors have been enough to stall EUR/USD out at resistance dating back to the May, August, and September 2016 highs.

All of the aforementioned influences have been enough to put a halt on the US Dollar's decline for now. Technically speaking, the DXY Index has turned at a key area of support, which had previously been carved out by the December and February swing lows against the October high (chart 1 below). Given recent price action, it would appear that DXY Index is now taking the shape of a triangle or a wedge (depending upon one's point of view) as it maintains its rally from last year's, lows established in May 2016.

Looking ahead, four Fed speakers due up today can help clarify the degree of hawkishness the FOMC will have over the coming weeks as markets try to sort out the timing of a second rate hike this year. The final reading of the Q4'16 GDP print should come and go without much attention paid. Finally, on the radar will be EU President Donald Tusk's response to the UK finally triggering Article 50, which should set the tone for the early stages of the Brexit negotiations.

See the above video for technical considerations in DXY Index, EUR/USD, and GBP/USD as we head into the final trading days of the week.

Read more: A Look at GBP-crosses as Brexit Officially Begins