DXY Looking for a Lifeline as it Nears Crucial Support

- Gap between 'hard' and 'soft' US economic data proving to be a burden for US Dollar, US equity markets.

- With Gold and EUR/USD at resistance, the greenback needs to make a stand before momentum carries it away.

- Over two-thirds of traders are net-short EUR/USD, while 72% are net-long USD/JPY; neither positioning bodes well for the greenback in the short-term.

The end of the month is typically a quieter time for the economic calendar, although today is probably the busiest day of this week for the US Dollar with the US Advanced Goods Trade Balance figures and US Consumer Confidence due out. Market participants will have a close-up look at the divide between 'hard' and 'soft' economic data, and whether or not that dissonance persists.

'Hard' data refers to figures that reflect actual economic activity, like retail sales or the trade balance, while 'soft' data refers to sentiment surveys, like consumer confidence. As the figure below shows, the gap between hard data and soft data in the United States has been quite prevalent, especially since over the past month (chart 1). 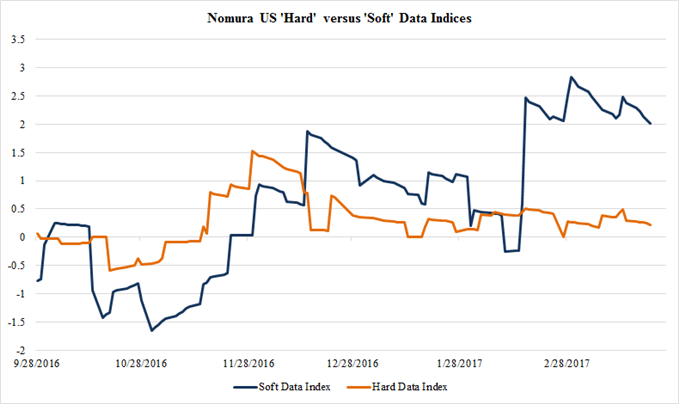 These figures are interesting because they underpin the dramatic differences in GDP forecasts for Q1'17 for the United States between two prominent forecasting models, the Atlanta Fed's GDPNow and the NY Fed's Nowcasting Report. The former is calling for a Q1'17 GDP reading of +1.0%, while the latter stands at +3.0%. While both are dynamic factor models (which measure the co-movement of multiple time series at once), they are built very differently: the Atlanta Fed's only uses hard data in an effort to immitate how the Bureau of Economic Analysis computes GDP; while New York's uses both hard and soft data, as a way to try and incorporate how sentiment plays a role in shaping future economic activity.

Why does this matter? For the US Dollar, there is a rather underwhelming feeling coursing its way through the market right now: US economic activity isn't strong enough to justify three rate hikes in 2017; and the lack of a coordinated fiscal policy rollout from the Trump administration will prevent the expected boom in US economic activity from being realized. The diminished prospect for fiscal stimulus means inflationary pressures won't rise to the degree previously thought, so the Fed won't be inclined to hike more than what's priced into markets already.

The US Dollar needs a lifeline right now before momentum carries it away. With EUR/USD and Gold near key resistance, and the DXY Index nearing support over the past 11-months, the best thing for the greenback would be for the gap between hard and soft data to close to the upside. That is, for reality to catch up to the high expectations that have proliferated in recent weeks.

Otherwise, if the gap between reality and expectations persist, there are key worries out of the US to worry about in the month of April, mainly whether or not the US Treasury runs through its extraordinary measures by April 28, which could prompt a government shutdown. After last week's legislative stumble with respect to healthcare, markets - the US Dollar, US equities, and US yields - won't be thrilled if the prospect of another US debt downgrade a la August 2011 becomes a possibility.