The British Pound is rallying sharply this morning as UK Prime Minister Theresa May has formally announced that the government will seek parliamentary approval to trigger Article 50, the legal mechanism by which the UK could leave the EU. Whereas UK PM May is not saying anything different than she did just last week when she said, "We are leaving...We are coming out," the context in which it is occuring is now completely different. Brexit now appears 'soft' instead of 'hard.' 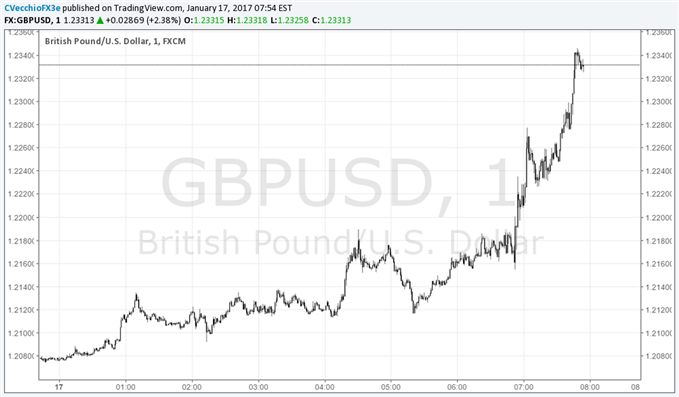 The decision to include parliament in the Brexit process is an important one. As we've maintained since the Brexit vote itself, as a non-binding resolution, it would require Parliamentary ratification. Why did the UK PM include parliament now? It seems that the UK Supreme Court is set to rule against the government's Brexit appeal.

How do today's comments from UK PM May differ from those last week, then? It's important to recall that the vast majority of MPs were in favor of 'Remain' - about 75%. Seeing as how it would be political suicide not to respect the democratic will of the people, parliament seems poised to approve the triggering of article 50 if a deal is presented that they like. Implicitly, this means that Brexit will be as soft as possible, if it happens at all.

As we wrote last week, "Parliamentary inclusion could result in market participants stepping away from the 'hard Brexit' narrative. Thus, while GBP weakness is picking up in the near-term, by no means do we feel that this is the start of the next significant leg lower yet; there is too much event risk ahead that could turn the tide sharply." Now that this is playing out, expect two-way volatility to pick up in GBP-crosses across the board in the near-term.

See the above video for a technical review of the DXY Index, EUR/USD, GBP/USD, AUD/USD, USD/JPY, GBP/JPY, and Gold.