- Italian referendum results may create more problems for the domestic economy in Italy, but at the same time, insulate the Euro from an Italeave/Exitaly/Quitaly etc in the long-term.

- GBP/JPY is a prime candidate for further gains as Brexit looks softer by the day and the Yen has its 10-year yield tethered to 0% in a rising rates world.

Looking at the big picture, it's clear that the Five Start Movement won the battle to get Italian PM Renzi out of power. But in doing so, it may have lost the war to achieve ultimate power itself, closing off a pathway for it to take Italy out of the Euro and the European Union. In other words: this may mean more trouble for the Italian banking system than it will for the Euro itself. Any actions that insulate the Euro from tail risk (i.e., contagion from a bank failure or a break-up of the bloc) should be viewed positively by markets. See my full analysis on the Italian referendum and why the Euro rallied from yesterday.

Elsewhere, in other economic populism-related news, the Brexit hearings have continued at the UK Supreme Court and thus far, markets are pricing-out the likelihood of a favorable outcome for UK Prime Minister Theresa May; the resilience of GBP/USD during the greenback's recent is a testament to this sentiment swing.

The British Pound may see that its positive influences have staying power. Our long-term view of Brexit has always been that, because parliamentary ratification of the June 23 Brexit vote would be necessary before Article 50 could be triggered, and that the vast majority of MPs were in favor of 'Remain,' that once Brexit took shape, it would be of the soft variety; that the UK could enter a relationship with the EU akin to what Switzerland has under EFTA or Norway under EEA. 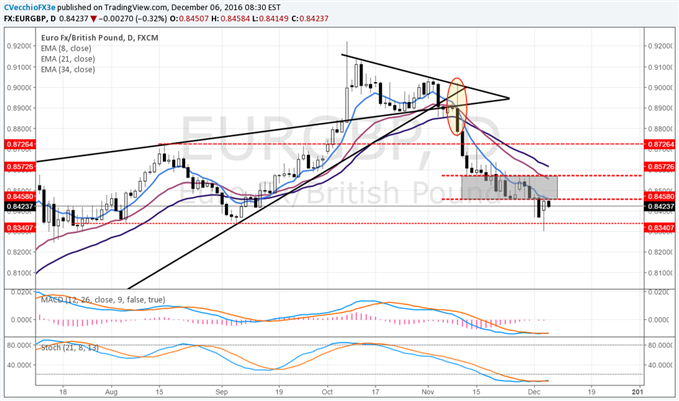 The focus for the GBP-crosses should remain on EUR/GBP and GBP/JPY at present time. EUR/GBP represents a way to take on exposure to the European populism threat headed into 2017, particularly as the fallout from Brexit looks more and more limited. French elections in April and May will be highest hurdles to clear for the Euro.

On a technical basis, EUR/GBP has been behaving in consistent manner during its recent downtrend (starting with the November 9 outside engulfing bar circled on the above chart), 'stepping down' from one level to the next, treating former support as resistance along the way. Now, with 0.8340 in sight, EUR/GBP retains a bearish bias in the near-term so long as it holds below 0.8455/60. 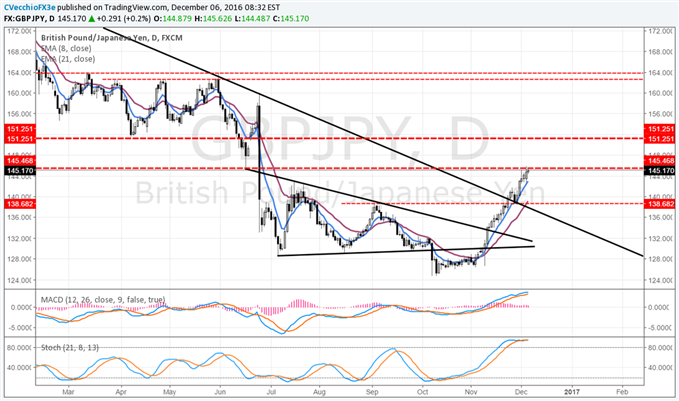 GBP/JPY takes advantage of a different theme: the rising rate environment. While piggybacking on abating Brexit concerns,, GBP/JPY should remain supported regardless as long as risk sentiment stays elevated (continuing its ride along the daily 8-EMA). Yet the driving factor may very well be the bump in UK inflation expectations (thanks to the earlier weakness of the Sterling), which has seen Gilt yields jump considerably over the past few weeks.

See the above video for a technical review of the DXY Index, EUR/USD, GBP/USD, AUD/USD, USD/JPY, EUR/GBP, EUR/JPY, and GBP/JPY.