US Elections Preview and Timeline: When Will States Report Results?

- FX markets have been quick to brush off the Fed amid the US election; that should change quickly once the vote comes to pass.

Recent US Presidential election polls have recently showed that Democratic candidate Hillary Clinton retains a narrow lead over Republican candidate Donald Trump, although the race had tightened up considerably through the end of October into the days before the election. With voting now getting under way, sentiment is truly neck-and-neck: the RealClearPolitics polling average stands at +3.2 Clinton, a lead cut in half from just two weeks ago.

This is the norm, not the exception: nearly every poll in the days ahead of the vote have been within a few percentage points of one another. The US Presidential election, at least according to polls, depending upon the polling margin of error, may ammount to little more than a coin-toss.

Markets have a different idea. According to betting houses, with odds aggregated by PredictWise, there is only a 12% chance of a Trump victory – a whopping 88% chance of a Clinton victory. This view is quite divorced from the sentiment of the broader public, evidently. There’s only one way to resolve this dissonance: getting the actual poll results. 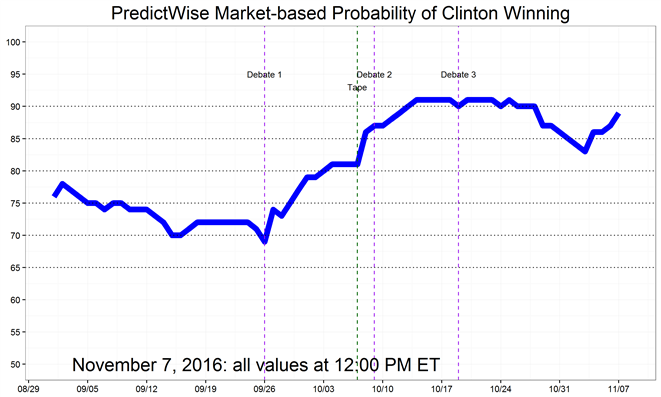 What should we look for in the voting breakdown? The Trump campaign is expected to perform well in less affluent, rural regions where the demographics are characterized by large numbers of low skilled and/or older voters. Meanwhile, the Clinton campaign is anticipated to score gains in metropolitan and more affluent, urban areas with a large number of college graduates and minorities.

It’s important to keep in mind that typically in the later afternoon, exit polls start to be released by the major media networks. Normally, at least since the 1980 election disaster for Jimmy Carter, networks have refrained from releasing early vote counts so as to limit the potential influence the results have on voters in Western states. Additionally, early exit polling isn’t always accurate. If it were, then history would be written differently: exit polls saw John Kerry as the winner of the 2004 election, not George Bush; and exit polls saw Mitt Romney beating Barack Obama in Florida in the 2012 election. Obviously, neither happened.

Finally, for those that are unfamiliar, the US Presidential election is not determined by popular vote but by the Electoral College. Each state receives a certain number of Electoral College votes (EVs) based on its population, with 538 total votes. Whoever wins the popular vote in a given state wins that state’s EVs. The first candidate to amass a majority of EVs – at least 270 – wins the Presidency.

See how markets are positioning for the election ahead of time.

18:00 EST/23:00 GMT – Polls officially close in Indiana, the home state of the Republican nominee for Vice President. While the state is expected to be carried easily by the Trump ticket, an upset here would change the expectations for the rest of the evening (in favor of Clinton) considerably.

19:00 EST/00:00 GMT – We should expect a few results from Florida, New Hampshire, and Virginia. Among these results, Florida is the most important with its 29 EVs. Assuming an electoral map based on the 2012 election results, Florida may be make-or-break for the Trump campaign: a loss here would make winning the Presidency almost impossible. A Trump win in Florida would generate a significant reaction by markets.

19:30 EST/00:30 GMT – As Florida, New Hampshire, and Virginia finish counting their ballots, two more crucial states will begin announcing results: North Carolina (15 EVs) and Ohio (18 EVs). Again, given the potential paths to victory, if Clinton wins either of North Carolina or Ohio, then the odds of Trump winning the presidency would take another significant hit.

20:00 EST/01:00 GMT – Although both are considered to be safe in the Clinton column according to recent polls, the results from Michigan (16 EVs) and Pennsylvania (20 EVs) – two more post-industrial states hit hard by trader, the core of Trumps’ economic message – should catch everyone’s attention. Again, the important idea is that Trump needs to peel away states that supported US President Barack Obama in 2012 if he is going to win the Presidency.

21:00 EST/02:00 GMT – Results from Minnesota and Wisconsin (10 EVs each) are due. While these states have been polling solidly in favor of Clinton, we’re on watch for a surprise. If Trump wins either of these two states, consider it a bellwether for the rest of the country, which by now has seen around 40 states report their results.

22:00 EST/03:00 GMT – With Western states now reporting, there is a simple rule of thumb to follow. If Clinton is at or above 192 EVs, the election is over. Four Western states – California, Hawaii, Oregon, and Washington – cumulatively totaling 78 EVs report, and all are heavily favored for Clinton; these states, if at 192 EVs before their results, would carry her through 270 EVs.