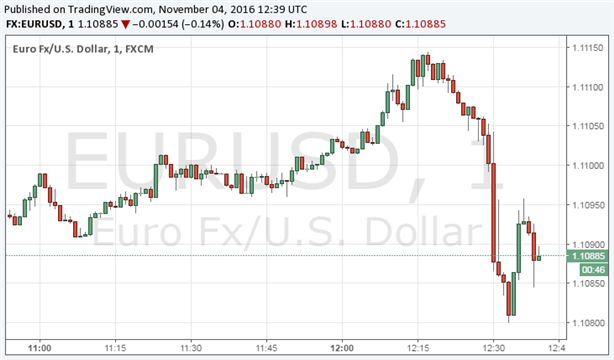 US Dollar Posts Modest Rally after Another 'Goldilocks' NFP Report

- Job growth came in below consensus expectations, but still strong enough to not disrupt the overarching trend.

Chalk it up as another ‘Goldilocks’ jobs report: not too hot to stoke fears that the Federal Reserve is falling behind the curve; but not too cold to dissuade the Fed from hiking rates at its next policy meeting. Job growth in October was a strong +161K (a hair above our estimate of +160K), albeit below consensus expectations of +173K, according to Bloomberg News. As a silver lining to the headline figure, last month’s +156K was revised up to +191K.

Job growth has continued on its strong trend, maintaining above +150K since the two abysmal months of April and May, proving them to be outliers. It’s important to keep in mind that, while markets psychologically hold +200K as the threshold, Fed officials like Janet Yellen and John Williams have spoken out saying +100K is enough to sustain the current unemployment rate. By the Atlanta Fed Jobs Growth Calculator, assuming a 4.8% longer term unemployment rate, the economy only needs +120k job growth per month to sustain that level.

The rest of the report painted a mixed picture of labor force strength, both ‘hot’ and ‘cold.’ The labor force participation rate was the disappointment, falling to 62.8% from 62.9%, which led the unemployment and underemployment rates to fall. The unemployment rate (U3) fell from 5.0% to 4.9% and underemployment (U6) fell markedly to 9.5% from 9.7%. Wage gains were the highlight, with average hourly earnings in October rising by +2.8% y/y from a revised +2.7% y/y in September.

Continued jobs growth, combined with signs of rising wage gains, only works to solidify the notion that the Fed will hike rates in December; today’s jobs report comes on the heels of the Fed’s November meeting in which they seemed to say that they were on the cusp of a rate hike. Immediately following the report, expectations for a rate hike in December rose from 71.5% to 76.3% according to CME Group, while Bloomberg’s calculation of Fed funds futures showed the implied probability of a December hike improving from 78% to 80%.

Following the data, the US Dollar rose against most major pairs. EUR/USD fell from $1.1114 to $1.1079. By the time this report was written, the pair had settled near $1.1089. Nevertheless, with the US Dollar and US equity markets trading in tandem, it seems that the US elections will be the ultimate driver of the greenback: there is a strong argument to be made that markets favor one candidate over the other; and whether or not the Fed hikes in December is merely a function of the outcome of Tuesday’s US elections.

Read more: Preview for October US NFPs and Outlook for US Dollar