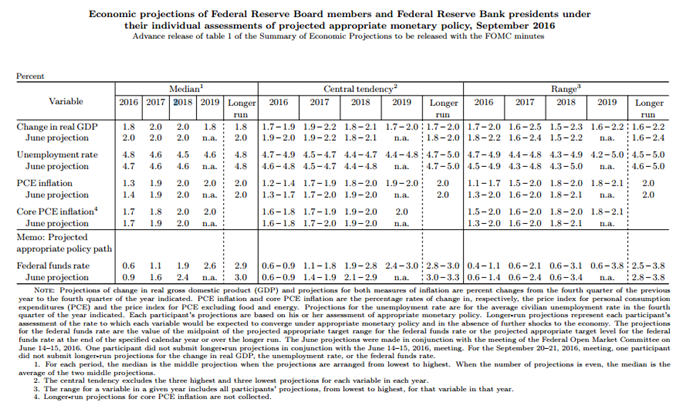 LT US Dollar Potential Damaged, Even as Fed Hints at Dec Hike

- Reduced glide path of rates takes fuel out of US Dollar's tank in long-run.

On the surface, the Federal Reserve's September policy meeting came and went exactly as expected: no rate hike materialized, but there was a strong hint of one to come in the near-future; a 'hawkish hold,' if you will. "The Committee judges that the case for an increase in the federal funds rate has strengthened but decided, for the time being, to wait for further evidence of continued progress toward its objectives."

Markets have taken the clear signal, pushing up December rate hike odds from 55% pre-FOMC to 63% at the time of writing today, per Fed funds futures. Yet what we're seeing in markets appears to be quite different. The US Dollar is falling across the board, with equity markets buoyed and risk, generally speaking, being 'on.' What gives then?

This all is directly related to the Fed's updated forecasts and projected glide path of interest rates. When it became clear the Fed was going to hike rates last December, in our November 2015 report, "Fed Rate Hike Cycle Doesn’t Necessarily Bode Well for US Dollar," we wrote "Given the Fed’s tendency to lower the glide path as time marches forward, this divergence is likely to shrink – which means the Fed’s projections are going to be softer, undermining what’s been the key catalyst for the US Dollar’s strength the past several weeks: rising yields and interest rate differentials."

This is the exact problem the US Dollar is facing today, even as December 2016 rate hike odds rise: the Fed is lowering is expectations for the US economy and thus, reducing the estimated glide path of interest rates. The notable cuts: 2016 GDP; long-run GDP; 2016 PCE; and 2017 Core PCE. Metaphorically, as it's been framed in context of these projections, the Fed has taken fuel out of the US Dollar's tank. 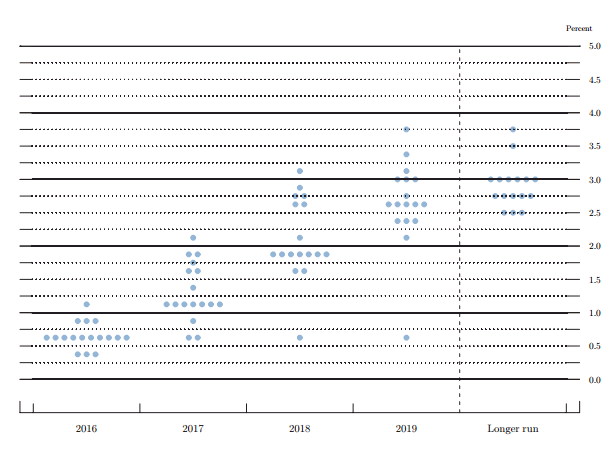 What does this all mean for the greenback? For starters, we're going to need to see sustained wage growth over the next year if the Fed is going to start to indicate that more, not fewer, rate hikes are coming over the three-year time horizon. Second, in terms of trades, US Dollar sell-offs, in anticipation of a December hike, will probably be limited, so long as rate hike odds hold steady around 60%. However, US Dollar rallies, with knowledge that the Fed will be hiking at a slower pace to a lower terminal rate level - the "loosest tightening" possible - will be equally shallow.