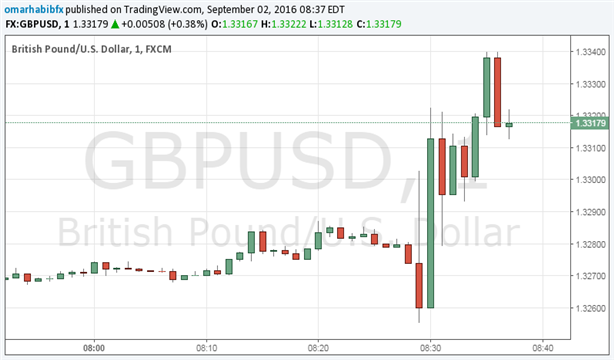 - Job growth came in below expectations, enough to knock a September rate hike off the table.

August jobs growth, as has seasonally been the case, was slower than that in recent months, but with the headline figure of +151K, compared with expectations of +180K, putting this at the low end of what could be considered the ‘Goldilocks’ zone. While job growth is certainly “slower” on a month-to-month basis, it is still showing a strong trend and that April and May were only slight disruptions. It’s important to keep in mind that, while markets psychologically hold +200K as the threshold, Fed officials, including Fed Chair Janet Yellen and FRB of San Francisco President John Williams have both said that breakeven jobs growth is only around +100K per month.

The rest of the report painted a mixed picture of labor force strength. The unemployment rate and labor force participation rate held steady at 4.9% and 62.8%, respectively. Wage gains were the biggest disappointment, as it slowed down to +2.4% from a revised higher +2.7% on a yearly basis. The underemployment rate held steady at 9.7%. Putting this in context of the recent slide in energy prices in the last weeks of summer, it’s evident there are few signs of strong inflation. Accordingly, this is the type of jobs report that will lead the Fed to a hawkish hold in a few weeks: the data isn’t strong enough to justify a rate hike now, but we’re close.

While almost every headline jobs growth read has been dubbed “most important NFP” for the last year and a half, this one certainly held importance. This report comes on the heels of Fed Chair Janet Yellen saying that recent economic data have supported the case for a rate hike and Vice Chair Stanley Fischer saying that the Fed cannot afford “one and done.” Immediately following the report, Fed funds futures contracts were implying a 20% chance of a rate hike in September, down from 34% ahead of the jobs data. Let’s not mince words: after forecasting four rates hikes in 2016 at their December 2015 meeting, the Fed needs to hike at least once this year – December, most likely, when their last SEP of the year comes out – to save face.

Here are the data hurting the US Dollar this morning:

Following the data, the US Dollar weakened signifcantly against most major pairs. GBP/USD rose from $1.3255 to 1.3340 and by the time of writing had settled near $1.3318. Elsewhere, US Dollar losses were consistent, with USD/CAD falling from C$1.3096 pre-report to $1.3017 at the time of writing. With FX volatility edging higher again as summer ends, it’s the right time to review risk management principles to protect your capital.

Read more: Preview for August NFPs and Implications for USD-pairs