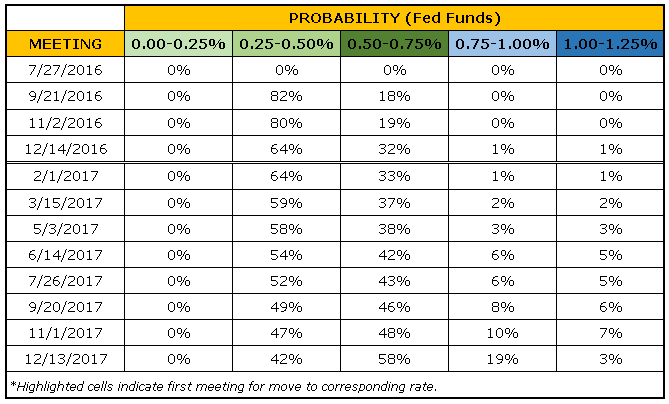 - USDOLLAR Index pacing for worst day since before Brexit.

-See the DailyFX Economic Calendar for next week’s US data.

In the days ahead of Friday's Q2'16 US GDP report, there was as high as a 65% chance of a rate hike by June 2017, according to the Fed funds futures contract, rising from an implied first-month hike in January 2018 at the start of July. The collapse in rate expectations post-GDP has proven to be a major burden for the US Dollar.

The dissonance between what the Fed said it might do - raise rates one to two times this year if US data continues to improve - and what markets are expecting - now, no confidence in a hike until at least January 2018 - is the greenback's albatross. The stark reality for Fed policymakers is that the US economy (+1.2% annualized) is growing slower than the Euro-Zone economy (+1.6% annualized). Against this backdrop, it seems highly unlikely the Fed would be in a hurry to raise rates.

Markets don't see any period before the end of 2017 as eclipsing the 60% threshold. The GDP report knocked at least six months off hiking expectations. Correlation is not causation, but the Fed has not raised rates unless market participants have priced in at least a 60% chance in the front month of them doing so. Accordingly, if US economic data remains surprisingly weak, then Fed officials will have no choice but to backtrack on their recent optimistic tone - something that could only hurt the US Dollar further..

Read more: EUR/USD Prospects Turnaround Over Span of a Week after GDP Surprises