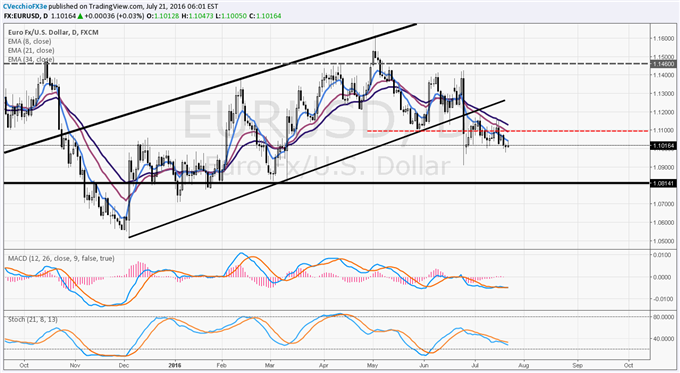 Preview for ECB: No Rate Cut Yet but Tweaks to QE Program Possible

- ECB likely on hold until next staff projections in September.

Join me today at 07:30 EDT/11:30 GMT for live coverage of the European Central Bank rate decision.

The European Central Bank meets for its July rate decision today, one in which, in the immediate aftermath of the Brexit vote, was rife with potential for surprise action. Instead, however, the stability in financial markets will most likely allow the ECB to keep rates on hold, staying with the pattern of only making a significant change to policy when the staff economic projections (SEP) are released (recall our discussion over the past year on how central banks, in an effort to become transparent, have become too predictable).

There are two things to watch for, if this meeting is going to be used as a runway to potential action at the end of Q3 or the beginning of Q4. First would be any language regarding the timetable for the QE program. Currently, it is set to end in March 2017; seeing the seeds planted for another six-month extension to September 2017 seems very possible.

Second, given the downdraft in core sovereign bond yields in recent weeks, the ECB will indicate that it needs to adjust the way its bond buying program is conducted. The ECB allots its bond buying based on the capital key. What is the capital key? The capital of the ECB comes from the national central banks (NCBs) of all EU member states. According to the ECB, the NCBs’ shares in this capital are calculated using a key which reflects the respective country’s share in the total population and gross domestic product of the EU.

As such, it's no surprise that Germany - as the country with the largest capital key contribution - has seen the belly of its yield curve (3Y-7Y) drift lower into negative territory, below the ECB's -0.40% deposit level - the threshold at which the ECB no longer purchases bonds in its QE program. Likewise, the ECB needs to either: remove the limiting parameter of -0.40% on its bond buying; or discard the capital key variable. In the first case, German yields would like move lower the fastest; in the second, peripheral yields like in Italy and in Spain. In either case, the potential for a signficant Euro move absent a notable driver - like a rate cut - seems limited.

This is updated to reflect market changes from its original publication on Wednesday, July 20, 2016.

See the above video for a technical review of the USDOLLAR Index, EUR/USD, USD/JPY, and GBP/USD. If you haven't yet, read the Q3'16 Euro Forecast, "Euro Awakes to Brexit Nightmare; Time for a Turn in EUR/USD?"as well as the rest of all of DailyFX's Q3'16 quarterly forecasts.