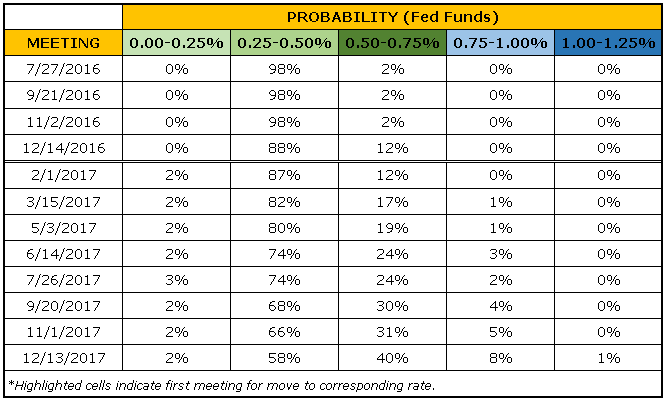 Preview for June US NFPs and Outlook for USD-pairs, Fed Policy

- US Dollar strength is a total house of cards without strong data.

- No Fed rate hikes being priced in until January 2018 at the earliest, according to Fed funds futures contracts.

Join me today at 08:15 EDT/12:15 GMT for live coverage of the June US Nonfarm Payrolls report.

The key question today surrounding the June US Nonfarm Payrolls report: was the abhorrent May report the beginning of a new trend; or simply a 'one-off?' After the last report, expectations for a rate hike by the Federal Reserve this year all but vanished. Today's data may help turn the boat. Current expectations for today's data are modest, with the Unemployment Rate expected to increase to 4.8%, and the headline jobs figure to come in at +180K.

A simply modest print may prove to be all the US Dollar needs to regain some footing, as its entire rally recently has been driven by negative exogenous factors rather than positive endogenous factors. Evidence that the May report was just a one-off, and that the US economy is still chugging along (albeit at a slower pace than desired - at least its not tilting into a recession quicker) means the Fed may reassess its recent dovish pivot.

As discussed yesterday, the trend of 200K jobs growth per month has recently been a psychological level for markets, but Fed leaders and centrists (the Goldilocks of the Fed; not too hawkish or too dovish) tend have another number in mind. In October 2015, San Fran Fed President John Williams wrote in a research note that he believed growth of +100K jobs per month was enough to sustain the growth in the labor force and maintain the current unemployment rate. In December 2015, Chair Janet Yellen reiterated this same view. By the Atlanta Fed Jobs Growth Calculator, assuming a 4.8% longer term unemployment rate, the economy only needs +105k job growth per month to sustain that level.

Regardless of today's report, there's another factor to consider when looking at the potential impact on Fed funds futures contract implied probabilities: the Brexit vote. There is good reason to believe that, even if the US economy isn't dramatically slowing (the 2s10s spread/yield curve flattening would disagree, but I digress), the Fed won't be in a hurry to raise rates given the growing potential for a European-borne financial crisis.

At the end of the day, a stronger NFP print can help bring forward rate expectations, which should help the US Dollar (and the USDOLLAR Index) set a more positive, interally-driven tone that would insulate the greenback in the event of a rebound in risk sentiment.

Let's be clear, though: all is not sanguine. As the Brexit uncertainty persists - and it will for several months if not years, unless the new UK prime minister chooses not to trigger Article 50 - a backdrop of improving US economic data could be a honey trap for the Fed. If the Fed raises rates too quickly and then Brexit hits the proverbial fan, a backtrack - a cut after a hike, and the introduction of more QE - would be severely damaging to Fed credibility.

See the above video for a technical review of the USDOLLAR Index, EUR/USD, GBP/USD, AUD/USD, USD/JPY, USD/CAD, and NZD/USD. If you haven't yet, read the Q3'16 Euro Forecast, "Euro Awakes to Brexit Nightmare; Time for a Turn in EUR/USD?"as well as the rest of all of DailyFX's Q3'16 quarterly forecasts.