Equity markets around the globe are taking a breather today, reverting some of the steep losses accumulated in the wake of the historic Brexit vote. Look no further than the stability in GBP/USD today (forming an inside day after a record-setting two days of losses) as the main catalyst. Correlation is not causation, but we know who is in the driver's seat when it comes to volatility and equities (charts below). 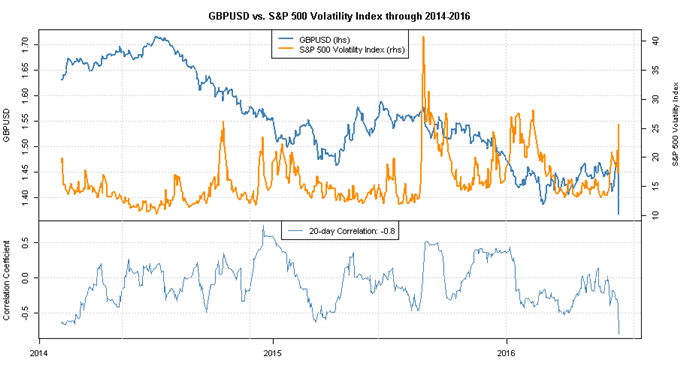 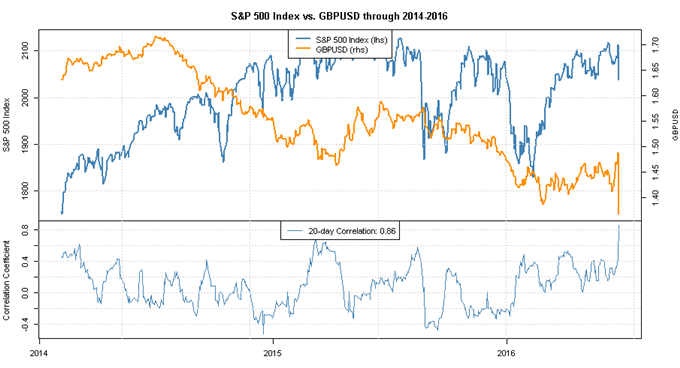 It's no leap to suggest that the British Pound - the Brexit vote - is the driver behind the swell in volatility and the turn lower in equity markets. The jump in volatility is particularly disconcerting, as historically, when the correlation between the S&P 500 and the VIX moves closer to -1, it means that markets are in a heightened state of fear (chart below). Such events are playing out now. 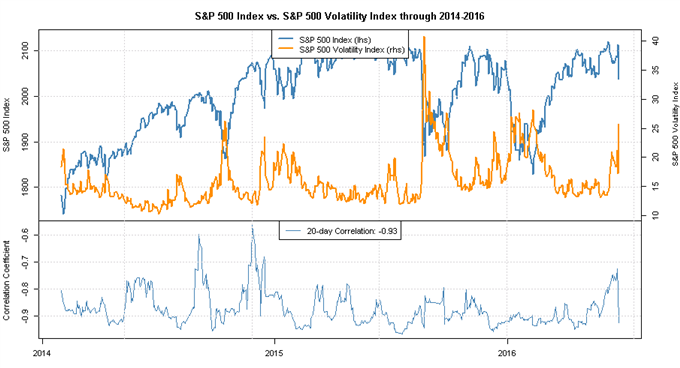 The question is, will heightened volatility stick around? It seems likely. Front and center, the lack of political cohesion in the UK right now, and the subsequent consequences, leave the future as cloudy as ever. Article 50, to trigger the beginning of the UK's two-year negotiating window to leave the EU, won't be triggered until a new Tory leader is chosen in three months' time when Dave Cameron steps down. Whether or not the new Tory leader survives a vote of confidence is another story; a general election could be on the table next year, which in and of itself would be a referendum on the referendum!

Markets don't like uncertainty, but what they don't like more is a wide variance in potential outcomes - that's exactly what this Brexit vote poses. The state and structure of the UK's relationship in the EU won't be clear for a long-while, and businesses simply can't afford to wait that long. Markets may be calmer today, but a lack of political clarity in the UK will weigh on the British Pound, which now has implications for risk markets globally.

Read more: Realization of Brexit is a Potential Nightmare for the Euro

FX volatility is set to remain high with the UK voting to leave the EU - it's the right time to review risk management principles to protect your capital.