Preview for June FOMC Meeting and US Dollar; Brexit Update

- Outside risk for FOMC to be headstrong à la January 2016.

- UK Chancellor of the Exchequer Osborne spoke again in favor of "remain" today.

What once was a much heralded and anticipated rate decision, the June FOMC meeting seems merely procedural at this point. The Federal Reserve will keep its main rate on hold at 0.25-0.50%, citing near-term, weak economic developments. The key for the US Dollar today, however, is to what degree of confidence the FOMC has in the US economy, or simply, 'how quickly does the Fed think it will be able to raise rates next?'

Certainly, market participants are looking around and don't see much to be excited about. As a gauge of long-term growth and inflation expectations, the US Treasury yield curve has flattened significantly over the past year (chart 1 below). The evolution of US economic data over the past several months has, in investors' minds, reduced the potential for substantially higher interest rates in the long-run. If the US economy is close to moving to a recession, look for the yield curve to invert (2s10s spread) - an inversion preceded each of the last seven US recessions (every recession in the post-war era). 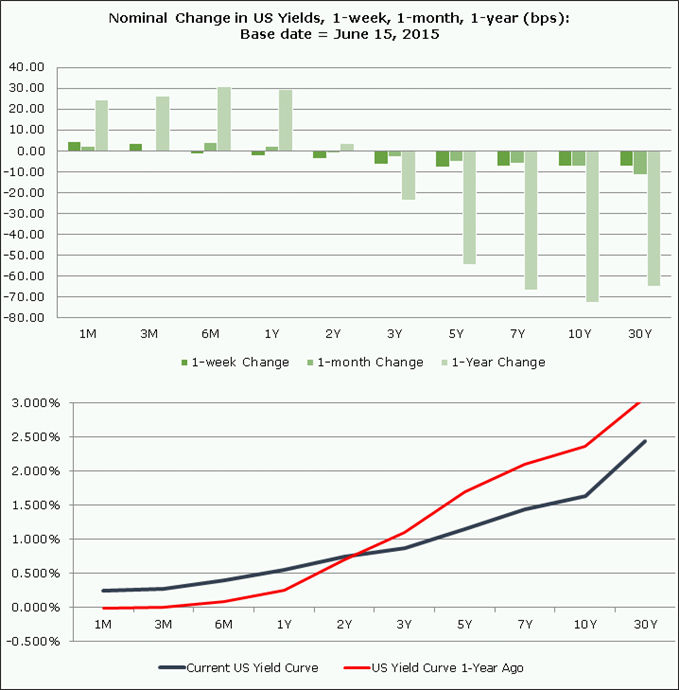 In December 2015, we pointed out the US yield curve was already starting to flatten out, which was the bond market's way of saying that long-term growth expectations weren't looking so hot. In turn, as this flattening has continued, market participants have reduced expectations for the Fed to tighten policy further (an expanded interpretation is that the Fed's insistence on raising rates despite the obvious shortcomings in the economy may significantly reduce the economy's long-run growth potential).

After the past few weeks of US economic data (especially after that terribly disappointing May US Nonfarm Payrolls report), markets are barely pricing in February 2017 as the first period in which the Fed could consider raising rates (table 1 below).

As it were, the Fed's never raised rates unless the market has been pricing in the chance of a hike in excess of 60%, so in actuality, rate expectations are completely muted. This is the main source of risk for the US Dollar today. Should the FOMC choose to be headstrong as it was in January 2016 (refusing to reduce its glide path/dot plot), in this case, suggesting a rate hike is still "on the table" in the near-term (July or September), then it could help buoy the US Dollar, plain and simple.

Brexit Update: UK Chancellor of the Exchequer George Osborne was out today beating the doom drum about what the government would have to do in the event of a vote to 'leave' the European Union next Thursday, June 23. Ahead of his public appearance today, Mr. Osborne wrote that a Brexit would lead to a "profound economic shock that would hit the economy and could tip Britain back into recession."

According to the BBC, the UK Chancellor of the Exchequer said that he will have to cut public spending and increase taxes (more austerity) to close the gap on a £30bn "black hole" if a Brexit occurs. While this analysis may be factual and based in reality, it may not amount to more than fear mongering in voters' eyes after recent swings in polls.

Regardless, expect more and more (and more) UK public officials to speak between now and next Thursday, which could easily prove disruptive to markets and drive GBP-crosses up or down dramatically and quickly. Short-term measures of implied volatility are pricing in moves of excess of +/-3% between now and the June 23 referendum, making this an extremely risky environment to trade in. If you haven't reviewed risk management principles in the lead up to the Brexit vote, you should do so as soon as possible.