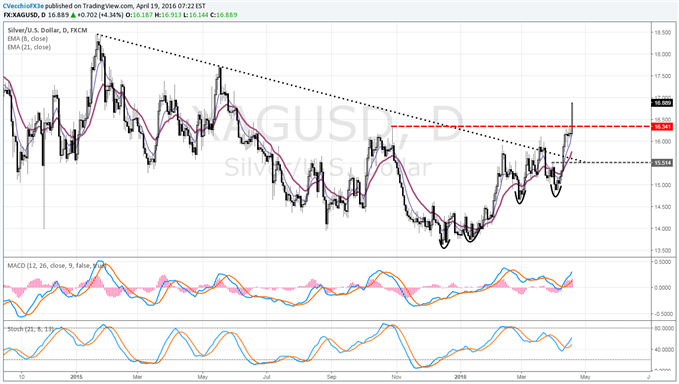 Silver-Gold Relationship Evolving in a Bad Way for US Dollar

- USDOLLAR Index back to last week's lows, below September and October swing lows.

It's day 2 in the post-Doha world, and in the words of Emmet Brickowski, "everything is awesome." Investors have shrugged off the lack of supply freeze from the world's largest suppliers as the implications for the Federal Reserve's easing policies are emerging: the Fed will have to keep rates lower for longer to help protect the US financial system from a series of potential defaults in the energy sector.

Whether or not the future actually plays out in such a manner is another tale to be told, but for now, higher yielding currencies and risk-correlated assets are jockeying for position over the Japanese Yen and the US Dollar. Equity markets are soaring: the Japanese Nikkei 225 has retaken all of its losses since March 30; the German DAX 30 is at its highest level since the first day of 2016; and the US S&P 500 just crossed 2100 on its way to its highest level since December 2, 2015.

For US equities, one of the more reassuring developments in markets could be what's going on with the US Dollar and precious metals. With the Fed acting like Goldilocks - the economy isn't hot enough to raise rates yet, but not cold enough to spur a growth scare - it stands to reason that, with the US presidential election around the corner, the Fed won't be too keen to raise rates mid-year. (This may be setting them up for a trap at the end of 2016 or the beginning of 2017, when they're forced to play 'catch up.')

Likewise, with commentary from various officials suggesting that inflation could overshoot, the recent turn higher in agriculture and base metal commodities suggests that fiat erosion may be creeping into the back of traders' minds. Silver prices, which we discussed last week as having the tendency to lead when precious metals rally broadly and the US Dollar falls, is breaking out today (chart 1 below).

The Silver rally alone doesn't tell the whole story. As we discussed last week, Silver prices tend to outpace Gold prices when the US Dollar is struggling, and vice-versa. This is why the Gold/Silver ratio has been so important to watch: the ratio continually climbed after precious metals peaked in mid-2011. This week, however, we may be witnessing a breakdown as the uptrend in the Gold-Silver ratio. 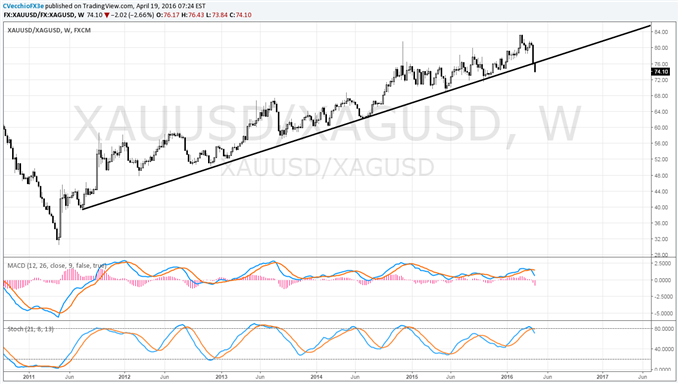 For the USDOLLAR Index, Silver prices outpacing Gold prices could spell trouble as the greenback gauge is back to testing its lows from last week. This is further progress towards breaking down through the swing lows dating back to September 2015. 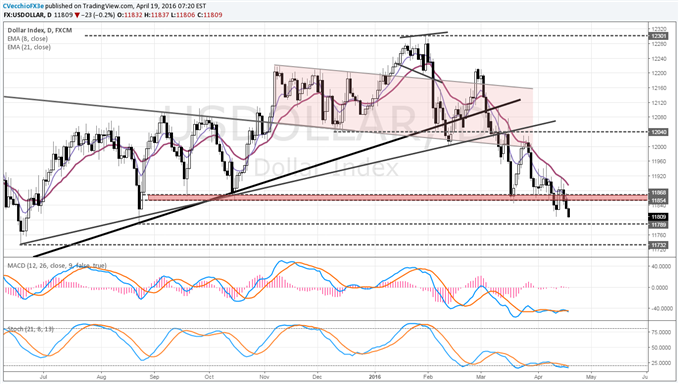