After Yellen, the US Dollar May be in Serious Trouble

- As USD slips, retail crowd positioning is beginning to turn as well.

If the Federal Reserve's March policy meeting wasn't a big enough hint in its own right, then yesterday's speech by Fed Chair Janet Yellen should have gotten the message across loud and clear: the Fed's rate liftoff will be gradual, and that accommodative monetary policy remains in place.

Markets have certainly gotten the message. While some non-voting FOMC members have called for a rate hike as soon as April, market participants know whose opinion matters most. With the Fed Chair issuing clear concern over the state of the "global economy" - she mentioned it nine times over the course of her remarks - investors are taking it as a sign that, with so many economic concerns in each corner of the globe, the Fed won't be tightening policy with any expedience.

Following Fed Chair Yellen's remarks, market participants are dismissing the hype that April is a "live meeting," and moreover, that given upcoming geopolitical risk (UK elections, EU-UK referendum "Brexit", US elections, emerging security concerns in Europe), a rate hike in the first half of the year is unlikely altogether (just 28%). Per the Fed funds futures contract, the first hike is expected in November 2016 - although with the US election around the corner, it seems highly unlikely that the Fed would act at a non-press conference meeting.

How far we've come. In December, the Fed said it was looking to raise rates four times this year. Yesterday, Fed Chair Yellen made it seem like the probability of multiple rate hikes this year is dwindling. The US Dollar is all the worse for the wear; deflating interest rate expectations have undercut the greenback's prime source of strength over the past several years (as was to be expected - we didn't think the Fed's hiking cycle would help the US Dollar).

As market participants come to terms with what the Fed may or may not do, there is certainly a sense of 'relief' out there: the US Dollar is falling across the board; US bond prices are rallying; and US equities are rallying. What relief? That the Fed is going to be keeping rates low for much longer than previously understood.

If the Fed Chair has just potentially given the green light to further US Dollar weakness, the charts should reflect it. Given the standing of the USDOLLAR Index, and a closer look at the individual components, it seems necessary to issue further concern about the US Dollar - more than indigestion may be due ahead. 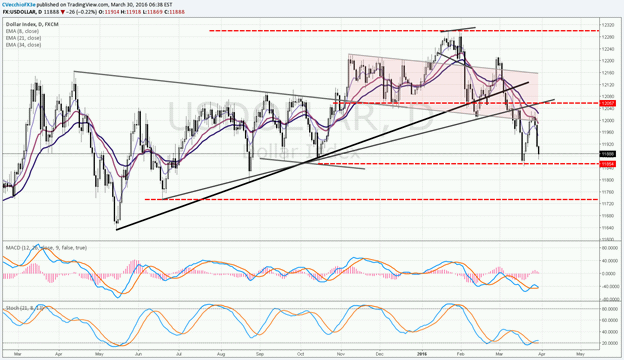 As the USDOLLAR Index approaches the October 2015 and March 2016 swing lows around 11840/50, we're drawn to one component in particular. 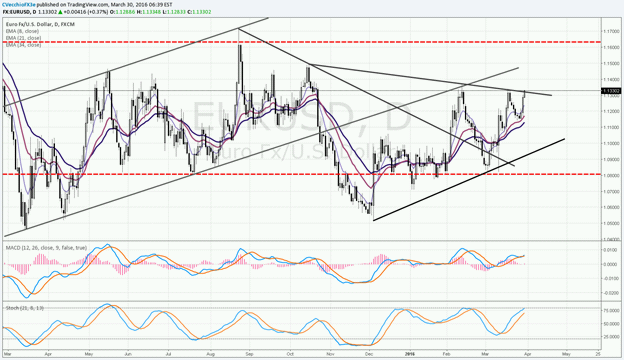 EUR/USD is quickly approaching its March high, and in context of the triangle that may have been forming since October 2015, a breakout to the topside may be due. For a full technical review of EUR/USD, as well as the USDOLLAR Index, GBP/USD, AUD/USD, USD/JPY, USD/CAD, and NZD/USD, please watch the video above.