Preview for ECB Meeting and Implications for EUR-crosses

- Euro will only stay lower if the ECB unloads its 'bazooka.'

The European Central Bank has a tall task ahead of itself if it's going to keep the Euro pinned lower after today. While ECB and Fed policies are moving in opposite directions at current time, both face the same issue, an issue that central banks are facing globally: they are running out of policy tools. For the ECB today, it is desperately in the need to surprise shorter-term traders and longer-term investors alike.

In some regards, the market has effectively priced in the first half of expected easing from the ECB: a cut to the deposit rate. 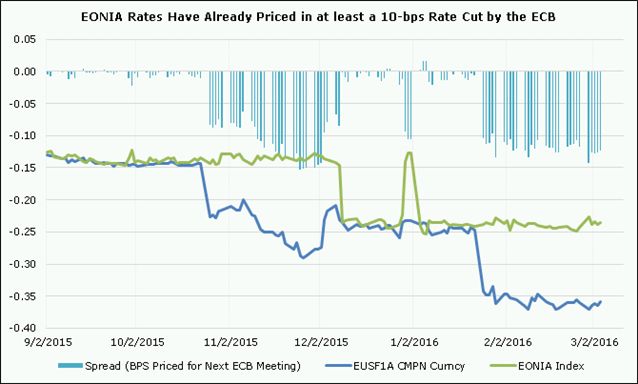 Forward rates are already pricing in at least a 10-bps rate cut by the ECB today, and that’s been the case since the week after the January ECB meeting. During the interim period, EUR/USD has risen above $1.1350 and fallen below $1.0850, which is to suggest that while the rate cut is priced in, other factors have come into play to swing prices lower.

To an extent, it may be the US Dollar, given that the market has pulled forward its expectation for the first Fed rate hike in to September 2016 (per the Fed funds futures contracts – in the second week of February, there were no rate hikes priced in during 2016 whatsoever).

Yet on the Euro’s side, disappointing inflation data and rising sovereign and financial credit risk across the continent have raised the stakes for the ECB to do more.

Accordingly, with a rate cut priced in, the ECB will need to do more in order to keep the Euro pinned lower and risk assets pointed higher. Sure, there may be some improvements on the margins – another six-month extension to the QE program or a variation on the collateral eligible under the current purchase program – but it’s unlikely that we’ll see an increase in the run rate of the program beyond €10 billion, if at all (currently €60 billion per month).

Additional steps like a tiered deposit system or a new asset purchase program seems like too big a hurdle to clear given the political discord wracking Europe currently, but would certainly constitute a surprise - and therefore a new, not-yet-priced dovish influence for the Euro. Otherwise, a December 2016 redux scenario is very much in play. 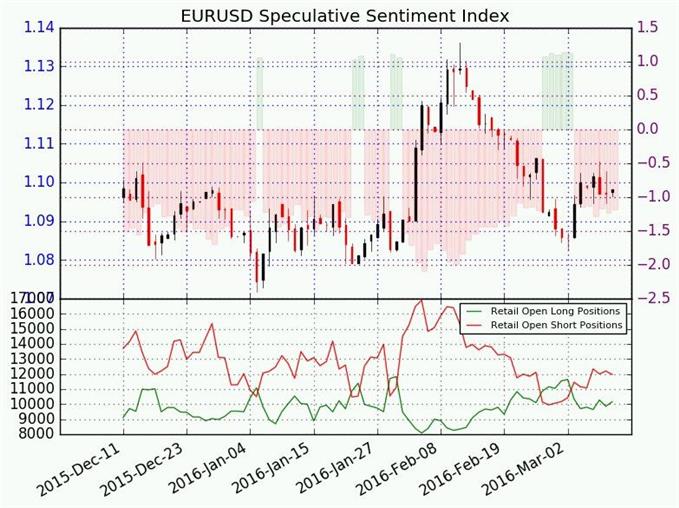 Ahead of the meeting, the retail crowd is currently net-short EUR/USD with 54% of open positions looking for further losses around the ECB meeting today. Follow live SSI readings here.

Join me today at 07:30 EST/12:30 GMT for live coverage of the ECB rate decision to discusses trade setups in the EUR-crosses.