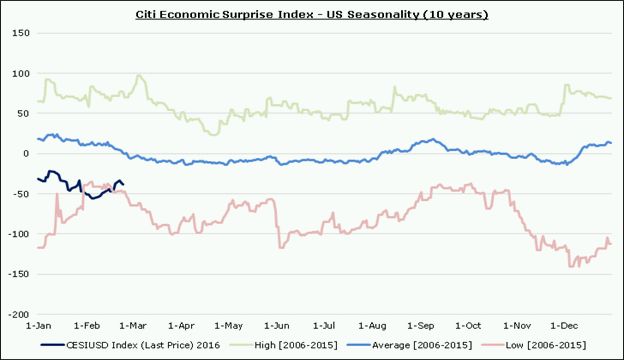 After the newswires were overwhelmed for days with stories regarding the UK's June 23 referendum on its membership in the EU, investors may finally be taking a breather to step back and reassess global markets. FX markets have been particularly volatile, especially among the European currencies; but there is a pause there too.

Now that the 'shock and awe' factor of a potential 'Brexit' has coursed its way through the system, investors have a chance to recalibrate their short-term concerns with longer-standing, overarching thematic influences like the state of US economic data - will it be strong enough to allow the Federal Reserve to hike rates in the first half of this year? - and how big the scale of the European Central Bank's easing program will be in March.

Even if the current calm in the market, particularly around the major GBP-crosses, is fleeting, it nevertheless holds true that the current pause may be attributed to emotions subsiding and logic prevailing. FX markets especially have been treating the Brexit headline since Sunday as an indication that the UK would leave the EU entirely, not that it would be opening up a two-year negotiating window to ammend its status (perhaps realigning itself more like Norway or Switzerland). That's to say the worst case scenario is only being discussed; none of the more likely intermediate options are.

Moving on to the US Dollar, the key theme for the buck is of course the ongoing search for stability in economic data. Market participants have been thoroughly disappointed by US economic data thus far in 2016 as the Citi Economic Surprise Index above shows (chart 1). Yet as discussed in the February 17 article, "US Dollar Desperately Needs Good Data to Offset Losses" and in the February 23 article "Several EUR-, GBP-crosses Testing Breakout Levels," the view that US data has been disappointing is all about context: the FRB of Atlanta's GDPNow growth forecast is still holding up at +2.6% for Q1'16.

Markets remain ambivalent about the Fed raising rates (per Fed funds, zero hikes are priced in; there is a 34% chance of a rate hike in December 2016). With a saturated economic calendar over the next two days, simple stability in the data - not even improvement - could go a long way to help calm fears over an immediate downturn in US economic growth, and in turn, help prime rate expecations for at least one rate hike this year.

See the above video for technical considerations in EUR/CAD, GBP/CAD, EUR/CHF, AUD/USD, EUR/USD, GBP/USD, and the USDOLLAR Index.