We've been fairly consistent in our skepticism about the Federal Reserve's intention to hike rates four times in 2016, and after yesterday's FOMC meeting, it seems that they are beginning to question their own intentions as well. There are two big takeaways from yesterday's meeting as it pertains to the Fed's tone:

First, the Fed included commentary that acknowledged that the US economy started to slow by the end of last year. Indeed, we are just coming off of some of the slowest US retail sales growth in the post-GFC era, and industrial production just suffered its worst contraction in a non-recession year since 1952. The Fed's commentary embodied these concerns, saying in their policy statement that "labor market conditions improved further even as economic growth slowed late last year." True, headline jobs growth remains firm (most recent US NFP was +292K), but take a look at recent US Initial Jobless Claims: they're up over 10% from their 2015 lows. These are not "normal" swings in economic data and hint at an increased possibility of a recession coming.

Second, the Fed included a remark on recent market volatility, saying that they are "closely monitoring global economic and financial developments and is assessing their implications for the labor market and inflation, and for the balance of risks to the outlook." Energy prices continue to slump and every time the Fed tells us that this decline is transitory - a decline started in July 2014 - it loses a little bit of credibility. Conditions abroad may be hurting the economy via the US Dollar, with the Fed noting that "net exports have been soft and inventory investment slowed."

It seems that, a few more weeks like we've had to start 2016, and the Fed will be keeping rates on hold in March:

The market's departure from the Fed's projected rate path couldn't be more pronounced than it is now. In fact, this is the least optimistic markets have been on the Fed raising rates in March since the Fed first moved in December. 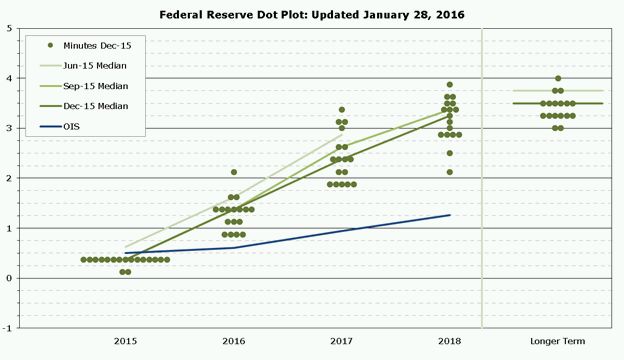 Indeed, it seems traders are now looking for the Fed to pull back its rate expectations, with only one rate cut priced in (for September) per the Fed funds futures contract. Likewise, OIS are forecasting that the 2018 year-end rate will be lower than the Fed's December projection for the 2016 year-end rate. Someone is wrong, and it looks like its the Fed.

This represents a major problem for the US Dollar, although not necessarily in the short-term as the greenback enjoys safe haven status during the latest waves of negativity. However, there will be a time in the future when the market and the Fed need to come to terms over their disagreement; it looks like the Fed will be the first to move. For now, this lack of policy clarity is doing anything but helping market sentiment.

See the above video for technical considerations in EUR/USD, USD/CAD, USD/JPY, AUD/USD, and the USDOLLAR Index.

Read more: FOMC Preview: For the USD, the Devil is in the Details

Be sure to join me and Currency Analyst James Stanley on Friday, January 29, at 09:00 EST/14:00 GMT for a special webinar discussing the ongoing slide in energy prices and their impact on FX markets.