EUR/GBP Trying to Bottom as BOE Keeps Policy on Hold

- EUR/GBP making a serious attempt at carving out a major bottom.

In what was a typically boring rate decision in a non-"Super Thursday" month, the Bank of England kept its benchmark rate on hold at 0.50%, where its been since March 2009. Of course, seeing that the BOE chose to stand pat at this meeting isn't really a surprise. Central banks have fallen into sort of a rut recently, where in the attempt to be as transparent in their dealings as possible, they have conditioned market participants to only expect signficant changes to policy when changes to economic forecasts are in hand.

This has been the case for every major Fed decision in the post-GFC years (which is why Chair Yellen 'jokes' at press conferences that the FOMC could act at a non-press conference meeting - yet they haven't). Indeed, the Fed raised rates last month when it updated its Staff Economic Projections. Likewise, starting last September, the ECB started following this track too; by this September, the only time changes to policies were discussed was when they were discussed in context of changes to the ECB forecasts and technical assumptions. Ultimately, the ECB followed through and cut its deposit rate in December after downgrading its inflation expectations. The RBNZ is guilty of this, too: in early-Q4'15, analysts across the globe picked up on the trend, and called for the RBNZ to cut rates in December; sure enough, they did, when they had a revised Monetary Policy Report on hand to justify it.

If this is true, then the BOE meeting next month will be of particular interest, as it falls on "Super Thursday" - when the BOE releases its rate decision, the minutes from the meeting, and its Quarterly Inflation report in one fell swoop. Similarly, our attention is focused on March, when the ECB, the Fed, and the RBNZ will all issue updates to their 2016 forecasts and longer-term forecasts alike.

For now, as markets deal with unending volatility spikes, and the BOE is likely to reduce its rate hike path expectations in February, one pair to watch is EUR/GBP. The British Pound continues to suffer for the reasons outlined in my trade of the year article as well - you should read it if you haven't (discussion on GBP is the last third of the article): 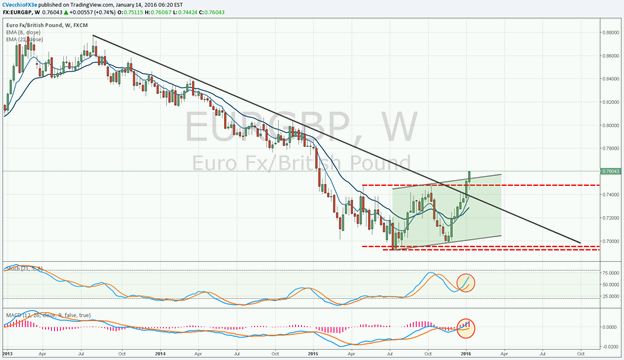 EUR/GBP has traded in a sideways range for the better part of the past year, carving out 600-pips in the process above £0.6900. The nature of the recent rally leads me to believe that a bottom effort may be in its early stages. Price has recently eclipsed both the May 2015 and October 2015 highs, breaking what could be the neckline of an inverse head and shoulders pattern.

Now that the downtrend from the July 2013 highs has broken as well, we're looking for upside momentum to accelerate. The weekly Slow Stochastics and MACD have just posted bullish crossovers through their respective median/signal lines; should weekly MACD fully climb through its signal line, it would be the first time since the end of 2013.

This is enough technical evidence, especially in context of our expectations for the Euro in the current environment, to believe that a bottoming effort in EUR/GBP pointing towards £0.8100 may have gotten started. The big question of course is, "How far will the ECB let the Euro strengthen before it loosens policy further?" If EUR/USD strengthens alongside EUR/GBP, it may not be that long. The next ECB meeting in which they'll update their staff projections is on March 10.

As always, stay mindful of the environment you're trading in and stay on top of your risk management principles. If you feel like you could be better prepared to protect your capital in these increasingly volatile markets, it would be worth your time to review our risk management series.