The Euro had a strong week to start the year, thanks in part to the sharp decline in European equity markets. The German DAX sunk by -8.3% during the year, and it was not alone: the US S&P 500 dropped by -6.0%, its worst start to any year, ever; and the Chinese Shanghai Composite – ground zero for volatility across global markets and asset classes – sank by -10.9%. There is a long-standing relationship between the Euro, as a funding currency, and risk markets, something known as the “portfolio channelrebalancing effect,” which we’vecovered extensively over the past year (examples in each link).

Going forward, as it pertains directly to the Euro, rather than a symptom of the global erosion in risk sentiment, traders may want to keep an eye on EUR/SEK. On Monday, the Riksbank codified its intention to intervene in FX markets. If you’re unfamiliar or want more background information, you may find the article “Riksbank Intervention Threat Aims to Lift EUR/SEK Prices” helpful. 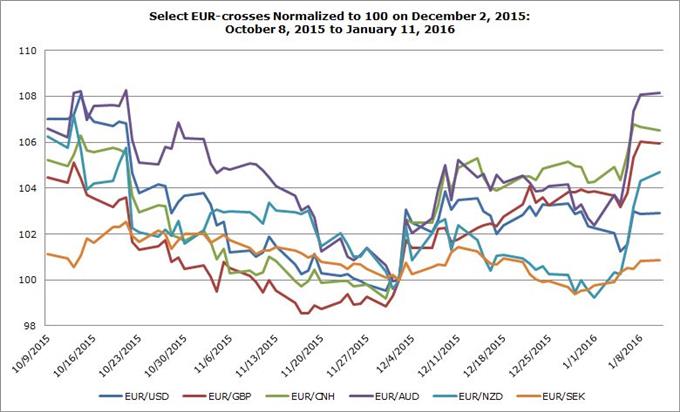 For now, the Euro’s appeal will persist, especially as traders unwind their long European equity positions. The groundwork for a broad Euro higher may be within market positioning, as non-commercial traders in the futures market are currently net-short 160.6K contracts through the week ended January 5, 2016. While positioning isn’t as extreme as it was in March 2015, when there were 226.6K net-short contracts in play, this is still a significant enough position that it may insulate the Euro from much damage at all in the very near-term.

Generally speaking, and was articulated in our Q1’16 Euro forecast, “Q1 2016 Forecast: EUR/USD Sideways Move Likely as Markets Wait for March Fed & ECB Meetings,” we think that the benefits of the deteriorating risk environment, coupled with the generally upbeat tone of European data ex-inflation (PMI readings across the region are holding up at or near four-year highs), should balance out the otherwise negative effects the ECB’s ongoing efforts to stimulate the region may have; lower yields tend to undermine a currency’s appeal, and the decline of short-term yields in the core countries has proven to be a series bearish catalyst for the Euro over the past 12 months (and conversely, rising short-term yields have supported the Euro on its way higher).

The ECB is only partway to completing it expanded asset purchase program (APP) implementation, having completed approximately €592 billion of purchases (€89.1 billion under the CBPP3, €11.7 billion under ABSPP, and €491.2 b billion under the PSPP) or just about 39.5% of the €1.5 trillion expansion. At a clip of €60 billion per month, the ECB still has some €900 billion in asset purchases to go. Thus, when framing the Euro’s recent appeal in context of this longstanding thematic influence, the Euro seems to benefit in the short-term should this fearful environment persist, but should things calm down, it may lose appeal quickly otherwise. This view is supported by the fact that the retail crowd has increased its net-short EUR/USD position over the past week as prices have edged higher – the crowd is fading the move. 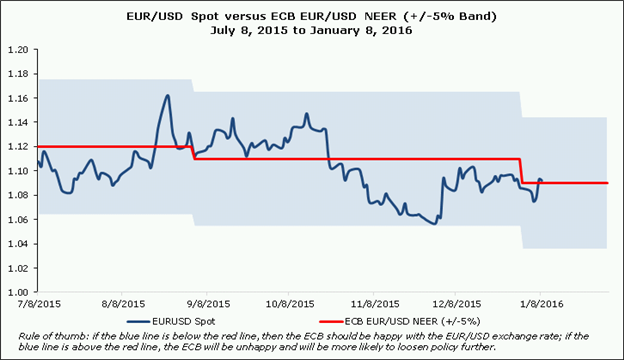 Should the Euro rally too fast and too far, the ECB will likely find it to be a significant obstacle in their objective to achieve price growth of +2% over the medium-term. For now, with EUR/USD trading just +0.20% above the ECB’s technical assumption for 2016, it’s unlikely that the ECB would act in March with the exchange rate in mind. 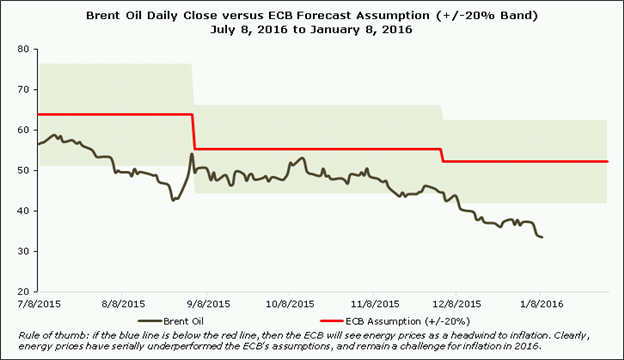 However, the elephant in the room, of course, is the non-stop decline in commodity prices, particularly oil. Brent Oil, the energy input the ECB bases their inflation forecasts around, is forecast at $52.20 per barrel. In the above chart, even assuming a generous +/-20% channel around this assumption, it’s been an increasingly rare occasion that Brent Oil has traded within this range (64% during the past six months, 58% during the past three months, but 0% over the past month). As of Friday's close, Brent Oil was trading -36% below the ECB's 2016 yearend forecast.

We think there is a pretty fair argument for both Euro gains and losses over the coming weeks, with the short-term bullishness (risk-off nature of markets) ultimately balanced out by the medium-term bearishness (the ECB’s ongoing efforts via QE and low rates). Keeping this relationship in check, if the Euro strengthens materially over the coming weeks, in context of how poor energy prices are performing with respect to the ECB’s forecasts, it would likely raise the likelihood that the ECB acts in March to expand their QE program or cut their deposit rate again.

Volatility should persist, but a sideways outcome seems very likely in the early part of 2016. This is an increasingly difficult trading environment, so it’s always a good time to review risk management principles in the "Traits of Successful Traders" series.

Read more: US Dollar Gaining in Risk-Off Environment, but for How Long?