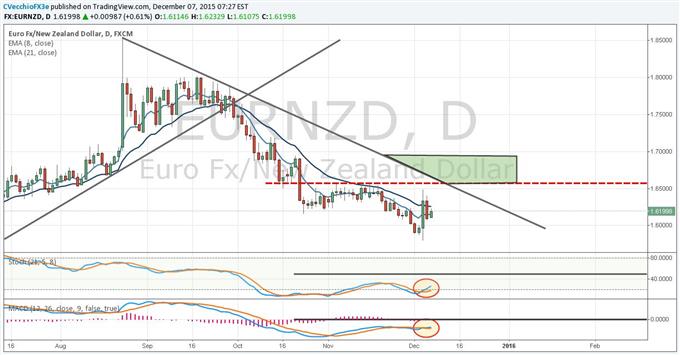 As Markets Digest ECB and NFPs, Time to Turn to EUR/NZD & NZD/USD

Whew. What a week it was, between the ECB meeting on Thursday and the November US labor market report on Friday. There may be two takeaways regarding central bank action: the ECB is far more hopeful that its policies will work than markets were led to believe; and that the prospect of a Fed rate hike in December is a lock - practically guaranteed, if you will.

With regards to the FOMC meeting on December 16, it seems that it will be worth parsing secondary and even tertiary US economic data between now and then in order to get a clearer picture over the minutia of the policy statement: the details will matter as markets read the tea leaves to figure out the projected glide path of interest rates.

As it stands, markets are pricing in at least two rate hikes in 2016, coming in April and November respectively. While we know which 'way' we are headed - the Fed will most likely be raising rates next week - we don't know the speed at which we will progress in that direction - what the frequency of rates hikes will be. If the data before December 16 (including an Advanced Retail Sales report and a Consumer Price Index release) shows that the US economy is headed into 2016 on (relatively) stronger footing, the Fed may feel confident that it could raises rates again by the end of Q1'16 - which could be a tailwind for the US Dollar as rate expectations are buoyed in the short-term.

Before the data is released, and we get a better indication of how fast the Fed will progress, the big central bank activity to watch for this week is the Reserve Bank of New Zealand policy meeting on Wednesday. It's widely expected that the RBNZ will cut rates by 25-bps, and given recent resiliency of the New Zealand Dollar, it's possible that the RBNZ even specifically attempts to talk down the value of the currency.

Accordingly, given what the ECB and the Fed has presented us with, two pairs come in mind this week: EUR/NZD and NZD/USD. It will be worth paying attention to shifts in retail trader sentiment around the RBNZ on Wednesday; the crowd typically fades directional moves, so a flip in positioning could occur in NZD/USD, for example.

See the above video for technical considerations in EUR/USD, AUD/USD, USD/JPY, NZD/USD, EUR/NZD, and the USDOLLAR Index.

Read more: ECB Post-Mortem: Higher in ST before Lower in MT for EUR/USD