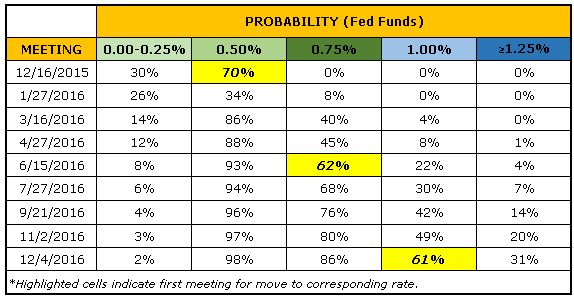 Preview for November US NFPs and Implications for December FOMC

- EUR/USD looks to stabilize after biggest move since start of Fed's QE1.

It's the last US labor market report before the Federal Reserve's December policy meeting, one which right now is seeing expectations ramped up for the first rate rate hike in nearly a decade. There are just two last hurdles to clear, however: will inflation pick back up towards the Fed's medium-term target of +2%?; and is US labor market strength strong enough headed in 2016 to keep rate expectations elevated?

We'll at least have a partial answer to the latter of the two questions, with the release of the November US Nonfarm Payrolls report today at 13:30 GMT. Current expectations are fairly strong, with the Unemployment Rate expected to hold at 5.0%, and the headline jobs figure to come in at +217K after October's impressive +271K.

Ultimately, given recent commentary from Fed officials, the US Dollar may need a blowout print here in order for future rate expectations to firm up; currently, only two 25-bps rate hikes are being priced in next year, per the Fed Futures contract:

Indeed, it seems that today's report really isn't about the December 16 FOMC meeting at all, but rather what the expected rate liftoff trajectory will look like. A strong NFP to close out the year could help restabilize the US Dollar, implying that the Fed might move its benchmark interest rate past 1.00% next year. Otherwise, a soft print could undermine any credibility for multiple rate hikes in the first half of 2016, setting up the December 16 FOMC meeting as a disappointment for US Dollar bulls. 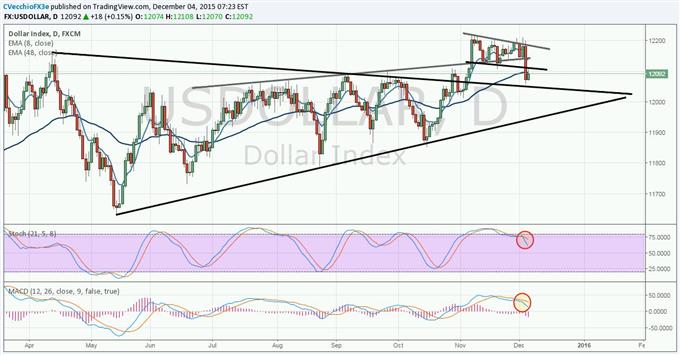 Our forecast from Monday of the USDOLLAR Index bull flag failing looks prescient now, but further losses are wholly contingent upon a longer-term breakout failure: the triangle going back to the highs we saw in April. Accordingly, should today's data result in the USDOLLAR Index trading below 12050, both the daily Stochastics and MACD could turn lower into bearish territory, putting coal in the greenback's stocking before Christmas. Below said level, a much deeper retrenchment could develop.