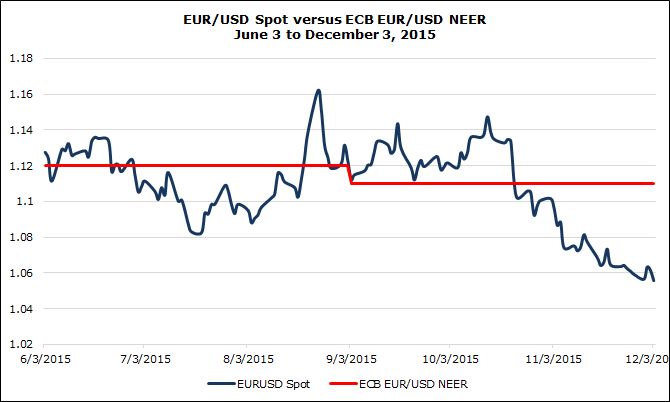 Preview for ECB Meeting and Outlook for EUR/USD, EUR/JPY

This report was originally published on November 28, 2015, but has been updated to reflect recent price changes and market data.

In some regards, the market has effectively priced in the first half of expected easing from the ECB: a cut to the deposit rate. This may have been priced in starting on October 22, when President Mario Draghi suggested that rates had not reached their lower bound – a remark that cut against the entire market’s understanding of potential ECB policy outcomes. This development garnered a significant negative reaction by the market on October 22, when EUR/USD saw a sharp >200-pip decline, mirroring the reaction in price on September 4, 2014, when the pair fell by -206-pips after the ECB announced a surprise cut to the deposit rate. So, if a deposit rate cut is coming on Thursday, the market may have already effectively priced it in (and then some): EUR/USD dropped from near $1.1350 ahead of the October 22 meeting to below $1.0560 at the time of writing this morning.

At this point in time, if a deposit rate cut is most likely priced in, so are two of our identified three enhancements to the QE program. At a minimum, it appears the market is expecting the ECB to cut its deposit rate by 10-bps, extend the QE program to March 2017, and increase the run rate of the QE program to €75 billion per month (per Bloomberg News forecasts and a compilation of bank research). If the ECB is able to deliver more than this, EUR/USD as do all EUR-crosses have a strong chance of continuing lower. Yet, in what is the more likely outcome now that Euro-Zone economic data ex-inflation is continuing to improve (the Euro-Zone PMI readings just hit four-year highs), the ECB will choose not to waste the bullets left in its chamber and instead leave open the possibility for more easing in the future.

Given the fact that the ECB's technical assumption for its inflation and GDP forecasts foresaw EUR/USD trading at $1.1100 (not near $1.0550), so it may see the Euro weakness as a tailwind and thus insulate the forecasts from too great an upheaval; inflation may be downgraded in the short-term, but the fundamental influence of more easing may see the longer-dated GDP forecasts boosted. Overall, the forecasts may not be as dovish as otherwise expected. 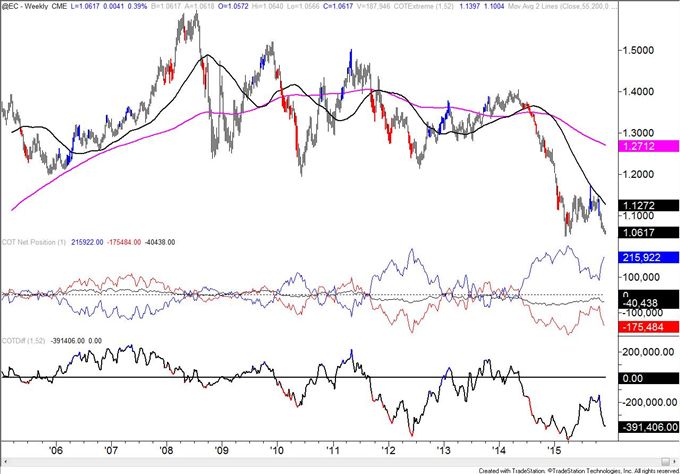 Our concerns about a potential upheaval around the ECB this week are further supported by recent extremes in positioning among speculators in the futures market. As of the week of November 24, there was a build up to 174.5K net-short contracts from 164.2K net-short contracts for the week ended November 17. In context of prices, right after EUR/USD fell into its yearly low around $1.0460, speculators held 226.6K net-short contracts. It’s getting crowded in the short Euro trade, which means if the ECB disappoints, EUR/USD could be ripe for a short covering rally before the Fed’s December 16 policy meeting.

Join me in the DailyFX Live Trading Room today at 07:30 EST/12:30 GMT for live coverage of the ECB rate decision.

Lastly, with this wave of event risk forthcoming, and it coinciding with the holidays and end of the year - typically a less liquid time historically - it's worth reviewing principles that help protect your capital. We call these principles the "Traits of Successful Traders." These types of low liquidity environments can result in sporadic price movements, especially around major event risk, which could result in brokers - FXCM or otherwise - having to raise minimum margin requirements to cope with changing market conditions. Traders active in the market over the coming weeks - especially around the ECB on December 3 and the Fed on December 16 - might find it beneficial to adjust their trading execution strategy to account for potential price gaps in less liquid environments.