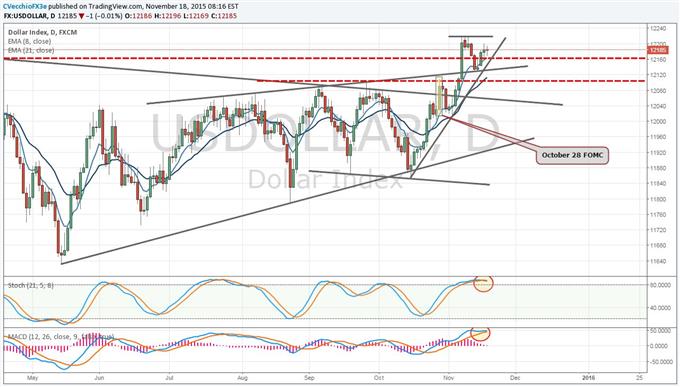 Later today at 14:00 EST/19:00 GMT, the Federal Reserve will release the minutes from their October 27-28 policy meeting. Typically, these minutes only generate a modest market reaction; but given the outcome of the October meeting, and in turn, the expectations for the December 16 meeting, today's set of minutes may carry additional weight.

Indeed, the October 28 policy statement release came as a surprise to market participants given the Fed's upgraded tone, leading to a broad US Dollar rally. In September, Fed officials declined the opportunity to raise rates due to a litany of factors, including: persistent low inflation due to the sustained drop in energy prices; the growth melt-off in emerging markets; and financial market volatility due to ongoing issues in China. Yet the October policy statement was notably absent of these concerns, leading traders to stake out rather aggressive USD-long positions in its wake.

While markets are already aware of the shift in Fed tone, due to the proximity in the shift relative to the extected rate hike event horizon, markets are likely to pay extra attention today to the details: what provoked the Fed to change its calculus and upgrade its assessments.

Notably, we'll be looking for signs that Fed officials were looking for incoming data to continue its improved trend as a sine qua non to any rate hike in December. If that's revealed, then the US Dollar already has a strong case to make: the recent October US Nonfarm Payrolls report was arguably the best report of 2015; and recent inflation data suggests that non-rent services - perhaps due to rising labor costs - are seeing higher prices (per Bloomberg Intelligence Economists Josh Wright and Carl Riccadonna).

The review of the meeting at which the Fed upgraded their assessments could prove to not only reaffirm traders' collective belief in action next month, but likewise cement the USDOLLAR Index in its recent breakout attempt amid rising interest rate expectations.