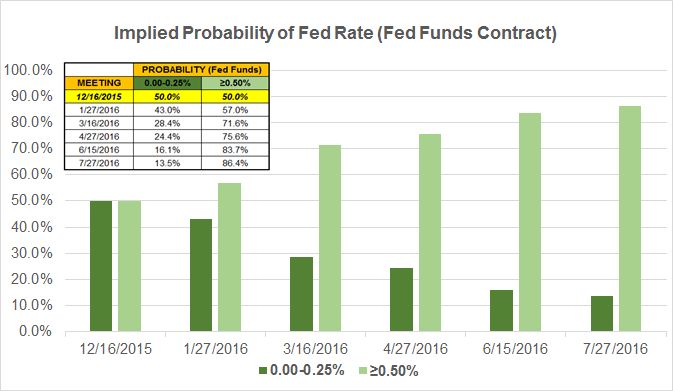 The US Dollar is taking a breather after sharp rallies the past few days, having broken towards fresh yearly highs post-FOMC (USDOLLAR Index reached 12110 this week, the highest level since April 15, two days after the yearly high was set). The Federal Reserve's latest policy statement, which was notably absent of concerns regarding developments abroad, included a line which suggested the FOMC will determine "whether it will be appropriate to raise the target range at its next meeting."

The strong signal that a December rate hike is on the table has pulled forward rate expectations quickly, with markets (per the Fed funds futures contracts) now pricing in a 50/50 chance of the Fed raising rates this year. With short-term yield differentials moving in favor of the US Dollar, the greenback has been broadly supported, support which should continue barring a significant deterioration in US economic data.

Overnight, we've seen a small fade develop in the USDOLLAR Index after two separate reports may have hinted at future policy actions from the Bank of Japan and the European Central Bank. While the BoJ's semi-annual outlook revealed downgraded growth and inflation forecasts from 2015 and 2016, the BoJ did forecast that its +2% price target would be achieved in H2'16; the Yen has rallied as further easing in the near-term was largely anticipated against the backdrop of further deterioration in Japanese CPI readings.

See the above video for technical considerations in EUR/USD, GBP/USD, USD/JPY, AUD/USD, and the USDOLLAR Index, as well as in EUR/AUD, and EUR/GBP.