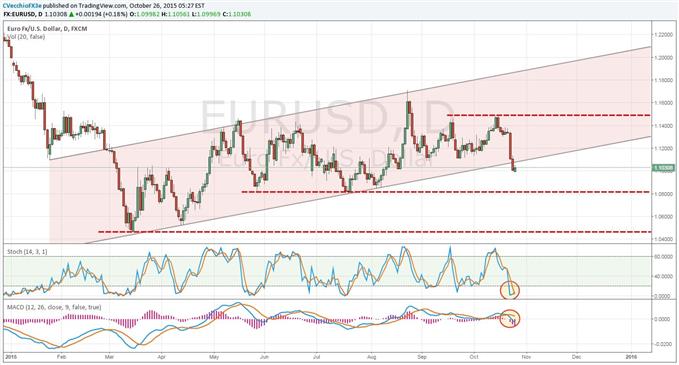 Next Leg Lower in EUR-crosses May Have Started

- ECB's QE-driven trading environment may be coming back.

The European Central Bank's meeting on Thursday was a game changer, with President Mario Draghi reintroducing rate cuts as a potential policy tool as the central bank attempts to ward off consistently low inflation and stagnant growth. Whereas market participants previously didn't think another deposit rate cut was an option, it now appears the ECB is going to be more forceful than otherwise imagined at their next meeting in December.

One of the major themes at the end of last week was the market shifting back into the gears of the QE-driven trade: when a given central bank weakens, its domestic currency depreciates, equity markets rally, and sovereign yields fall. In true form - confirmation that portfolio rebalancing channel effects are making their way through the market, the Euro was the worst performing major currency last week, while European equity markets rallied and German yields turned negative all the way out through six-years.

If December is truly the meeting to look forward to, we may now have five-plus weeks ahead for markets to toy with the notion of more stimulus from the ECB. As these measures are priced in, the middle of Q4'15 may prove troublesome to the Euro, as several of the major EUR-crosses may have started their next legs lower.

EURUSD broke its rising uptrend from the April, July, and August lows last week, an early indication that a six-month long bear flag may be initiating to the downside. Momentum indicators have turned sharply negative, with the daily Slow Stochastics slipping into oversold territory, while MACD just produced a bearish cross through the signal line. EURUSD could see price decline into $1.0800 over the coming weeks. 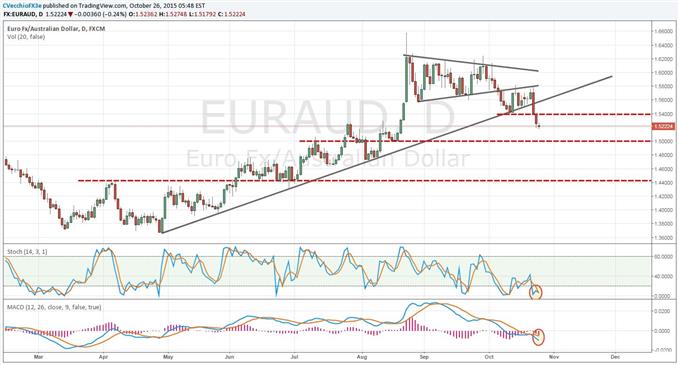 EURAUD has behaved in an increasingly bearish manner in recent days. After consolidating in a symmetrical triangle from the end of August to the beginning of October, EURAUD made a break lower and held the break down after a retest of former support. The move below its recent swing low of A$1.5395 coincides with a break of the uptrend from the April, May, and June lows. Both daily Slow Stochastics and MACD have turned lower into bearish territory, confirming the loss in trend. Swing levels near A$1.4985 and A$1.4430 may be achieved to the downside. 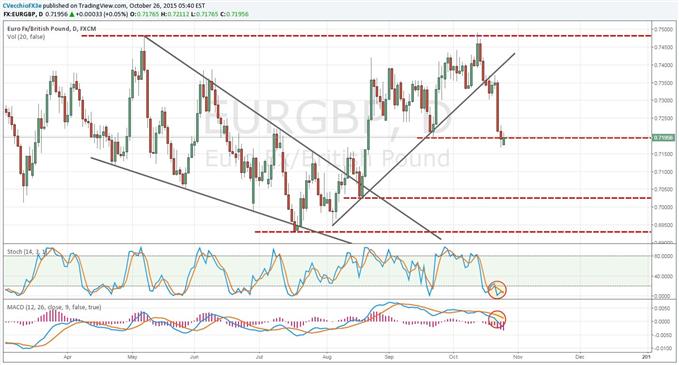 EURGBP recently completed a short-term bullish falling wedge reversal, trading up into the wedge's base near £0.7482 (May high). The reversal was only a short-term phenomenon, however, as the completion of the wedge coupled with a break of the reversal rally itself (from the August and September swing lows) developed in tandem. Price finds itself trading below the prior swing low of £0.7195, and momentum indicators have turned increasingly bearish. Recent lows around £0.7020 and £0.6925 are eyed.