- See the March forex seasonality report for trends in the QE-era.

This week’s FOMC reading is far and away the most important event on the calendar for the EURUSD, and even if the Fed drops the seemingly important word “patience” from the policy statement, we may be looking at a ‘blow off’ type of event. Not only is the market quite short Euro (181.K net-short contracts), but it is also very long the US Dollar: as of March 10, there were 81.3K net-longs among speculators in the futures market, the highest amount ever (exceeding the previous all-time high of 73.2K).

If the Fed is switching from a language-based policy (forward guidance) to a data-dependent one, then the market might quickly recalibrate and turn its focus to disparaging US consumption and inflation data that’s developed over the past few months. The latest batch of retail sales data released last week showed the weakest three-months of consumption since the Lehman Brothers meltdown in 2008.)

In a sense, this year is no different than what we’ve seen in recent years past: data has been coming in well-below analysts’ expectations, as forecasters have tended to be too optimistic about the US economy upon the start of a new year. The Citi Economic Surprise Index, a gauge of economic data momentum relative to expectations, has fallen to its lowest levels since July 2012.

This year may be different, however. Even during a period of seasonal weakness, 2015 has been unseasonably weak. The average of the CESIUSD over the past five years (2010-2014) on March 12 is +24.14, whereas the 2015 reading currently sits at -50.5. Even compared to last year, when the cold winter roiled the economy in the first few months of the year, the CESIUSD only registered -33.6 on March 12. Needless to say, data so far in 2015 has been vastly underperforming expectations (see chart below). 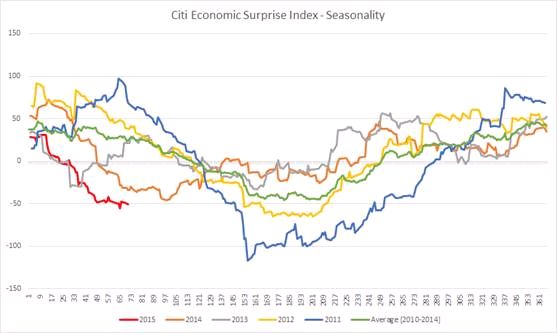 If the market recalibrates its view to US economic data, it will be severely disappointed; and that may take the wind out of the US Dollar's sails, especially versus the Euro in the short-term. See the above video for technical considerations in EURUSD, EURJPY, and EURGBP.

Read more: Euro in Freefall, but Losses against Dollar May Soon Find Relief