- See the February Forex Seasonality report and the implications for the majors.

Bank of England policymakers are coming up flush with their recent prognosis of the UK economy. Last week's Quarterly Inflation Report was the first spark for GBP-crosses as it appeared the central bank was taking on a more optimistic, hawkish view of the economy than markets were pricing in, and their views have been vindicated after the releases of several key economic data over the past two days.

Between the December and January labor market and wage figures released today (see the DailyFX GBP Economic Calendar for full details) and the inflation metrics released yesterday (which you can read about in this report), it would appear that the UK economy is set to live up to the BoE's lofty expectations. In fact, wage growth in the UK is now outpacing inflation by the greatest margin since 2008 - fitting neatly in line with the BoE's view that real wage growth in 2015 could be the best in nearly a decade. 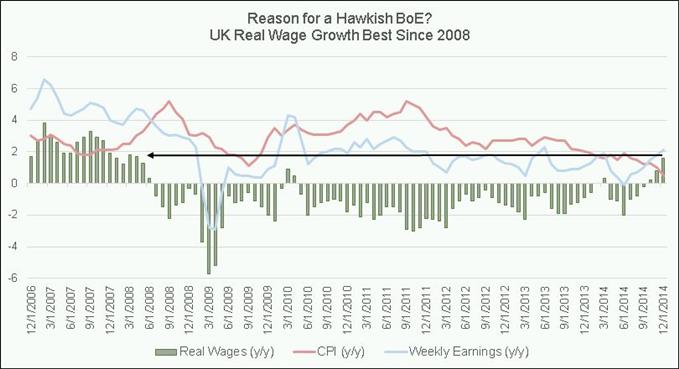 The important point, however, is not that the BoE is praiseworthy; but rather the reality of the UK economic situation is a lot brighter than the somewhat dampened perception coming into 2015. Accordingly, rate hike expectations - the backbone of any growth currency in the ZIRP world - have moved favorably for the British Pound over the past month.

The overnight index swaps market is now pricing in +25.0-bps in over the next 12-months after only pricing in +3.0-bps a month ago. The current implied probability of the BoE's main rate being equal to or exceeding 0.75% over the next 12-months, based on the Sterling 90-day forward curve, has jumped from 37.5% on January 17 to 52.9% as of the most recent reading (which has yet to take into account today's data).

What this means is the market, after downplaying the likelihood of a rate hike until the second half of 2016, is now pricing in the first rate move to come in early-Q1'16. GBP-crosses should remain supported on these developments.

See the above video for technical considerations in GBPUSD, EURGBP, GBPAUD, and GBPCAD.