- October is the last month of the worst stretch of the year for the US dollar.

- The European currencies (CHF, EUR, GBP) have found support in October since 2009.

For October, we continue to focus on the period of 2009 to 2013. The small sample size is not ideal, and we recognize that there is increased statistical stability with using longer time periods. However, because of the specific uniqueness of the past 5 years relative to any other time period in market history – the era of quantitative easing – we’ve elected to attempt to increase the stability of the estimates with the shorter time period.

In the QE era (which appears to be winding down now that the Federal Reserve has cut QE3 to $15B/month), October has proven to be a weak month for the US Dollar. However, it is worth considering that the US Dollar outperformed its very low expectations in August and September, suggesting a departure from the weak seasonal tendencies. 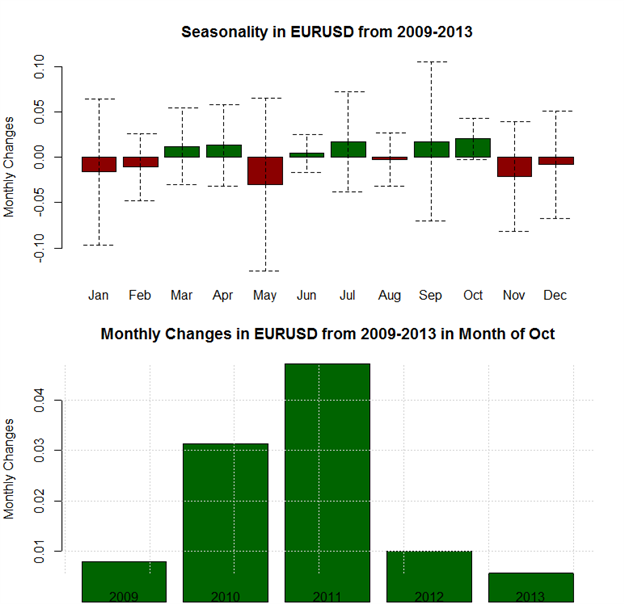 Seasonality tends to favor a stronger Euro in May. Gains have sharply decreased since the 2011 apex. In context of the divergence from the September pattern which called for a gain, the October seasonals may not have as strong of an influence. We are decidedly neutral, and a rally in the Euro would likely be corrective than of the full blown reversal nature. 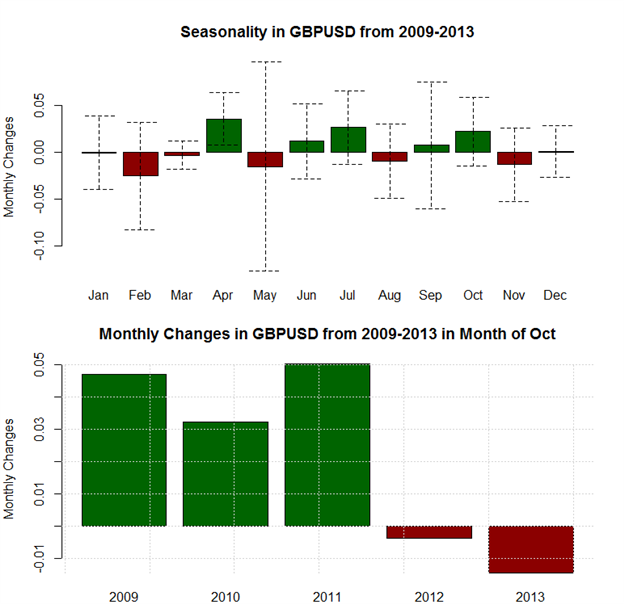 October has been the third strongest month of the year for the British Pound but that’s on the back of outsized gains in 2009 and 2011; GBPUSD has lost ground each of the past two Octobers, with 2013’s losses eclipsing those of 2012. In light of GBPUSD’s departure from the September seasonal pattern (which called for strength; weakness developed), we are taking a neutral outlook. 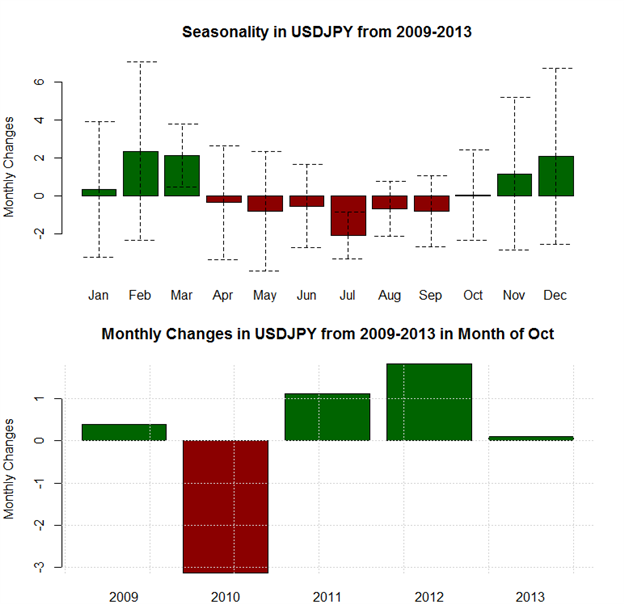 The worst stretch of the year is over for USDJPY, and if QE era seasonal patterns are accurate, it should be smooth sailing for the rest of the year. While October is the weakest positive month in Q4 historically, it does mark the end of a historical stretch of six straight losing months. However, with USDJPY breaking out in August and September (thus defying the seasonal tendency), bullish expectations may have to be elevated into year end. 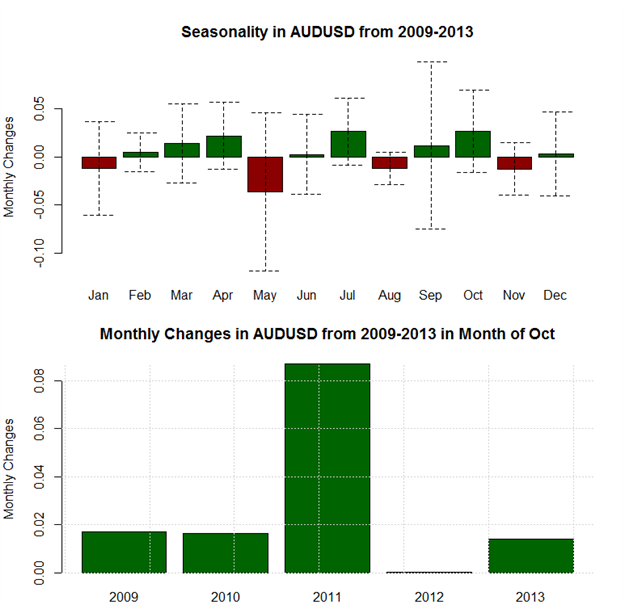 Seasonality favors a stronger Australian Dollar in October. October is neck and neck with July as the top month of the year during the QE era for AUDUSD, and not counting the outlier in October 2011, gains have averaged just north of +100-pips in October. Seasonality alone can’t help lift AUDUSD, however; and in context of the recent rampant selling (and break from the September seasonals), we are taking a neutral outlook. 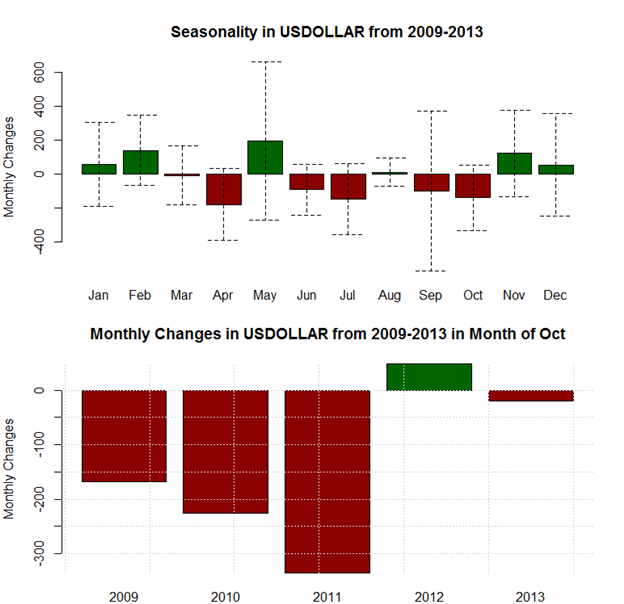 October has been the third worst month of the year for the USDOLLAR Index from 2009 to 2013, with four of the past five Octobers producing a negative result. Whereas the losses were quite steep from 2009 to 2011, the USDOLLAR has gone both positive and negative the past two years, averaging a small gain of +14.4 points. In light of the seasonals and the fact that the USDOLLAR is on its longest winning streak in history, we take a neutral outlook with an eye towards corrective price action rather than a full blown reversal. 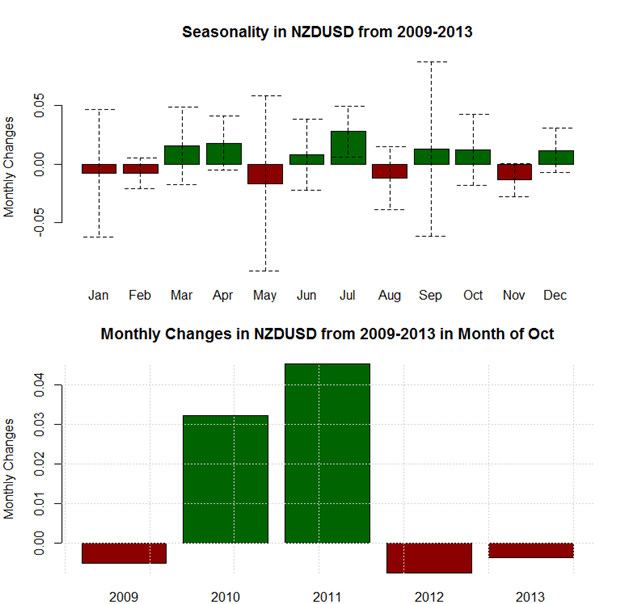 The QE era has produced gains on average in October for NZDUSD, but after massive underperformance and divergence from the seasonal pattern in September (-6.63%, gains were called for), we are taking a neutral stance. In the QE era, bullish NZDUSD Octobers have averaged gains of +387.5-pips while bearish Octobers have averaged loses of -54.6-pips. While our outlook is neutral, history suggests that a bullish outcome would be outsized while a bearish outcome would only be modest at best. 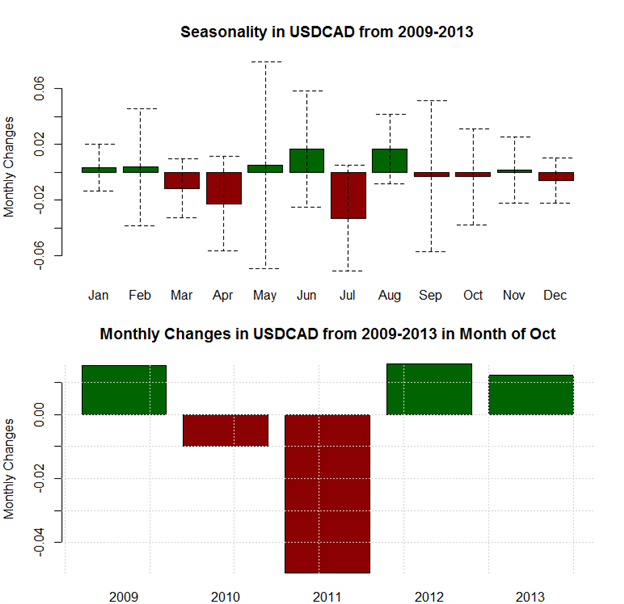 Seasonality favors a slightly stronger Canadian Dollar in October, though given USDCAD’s year-end seasonal statistics and recent October performances, we are adopting a neutral outlook. USDCAD rallied each of the past two years but fell in the two years before that. In the QE era, USDCAD has lost on average -32.2-pips in October. 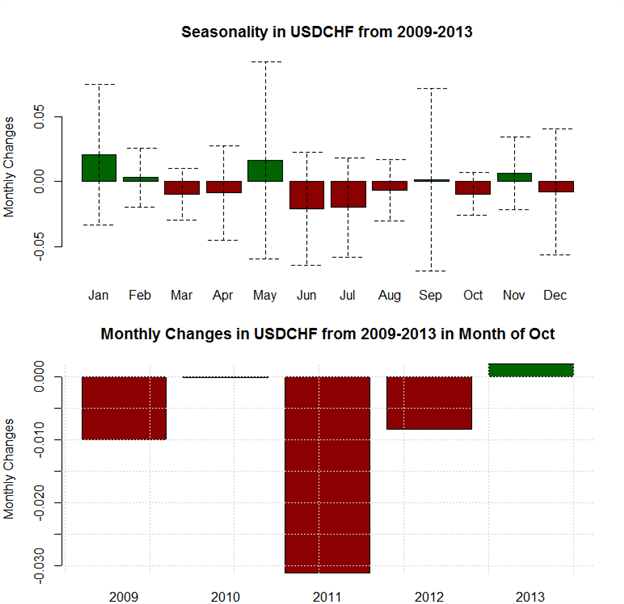 Seasonality favors a weaker USDCHF in October. However, USDCHF rallied last year and the average performance during the QE era is heavily skewed by the October 2011 Euro-Zone debt crisis flare up. USDCHF’s performance in October is heavily dependent on how EURUSD performs. 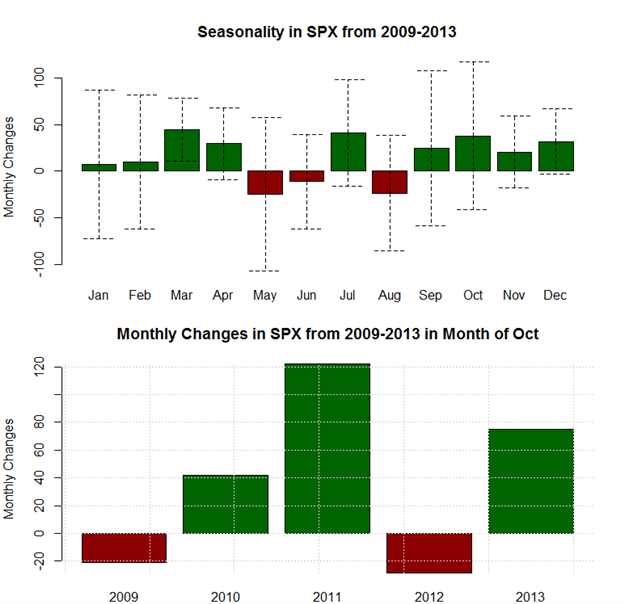 The worst stretch of the year is over for US equity markets, and in the QE era, there has been no stronger quarter than Q4. October has been the third most bullish month of the year for the S&P 500, and with the uptrend originating from the November 2012 low still intact, the outlook is bullish. 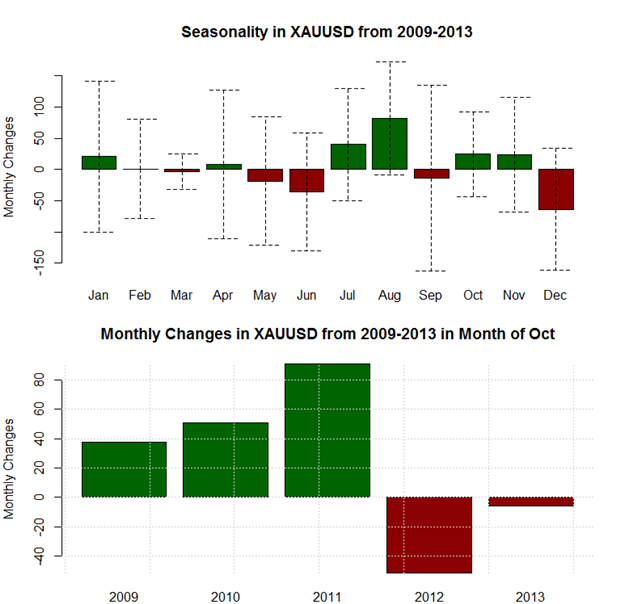 During the QE era, October has proven to be the third most bullish month of the year for Gold. However, Gold has not rallied in either of the past two years after seeing increased gains during October through 2009 to 2011. The outlook for October is further dampened after Gold’s crushing performance in August and September; the near-term technical pressure may be too much for seasonal bulls to overcome.