Fed, NFPs Line Up this Week with USD Technical Breakouts

A culmination of factors may be aligning for further US Dollar strength over the coming days, even as the economic calendar comes in rather light until Wednesday. However, with the Federal Reserve's July meeting in two days and the release of the July Nonfarm Payrolls report two days after that, there is little chance the US Dollar stays quiet for long.

The coming days are rather important for the US Dollar as the yield curve undergoes an interesting twist - or rather, flattening out. Over the past month, yields in the belly of the curve (3Y-7Y) have perked up, while yields at the long-end of the curve (10Y+) have continued to fall.

The flattening of the yield curve - when short-term interest rates move closer to long-term interest rates (spreads narrow) - is often seen as a precursor to a recession. With the 30Y bond yield at 13-month lows, investors have evidently latched onto the idea that growth will remain mixed over the near-term (Q1: -2.9%; Q2 forecast: +3.0%) while inflation, despite an improving labor market, will remain quite tame.

The current state of the US yield curve is clearly not one that is beneficial for the US Dollar. A steepening yield curve, in which long-term rates rise faster than short-term rates, has previously been the 'best' fuel for US Dollar bulls the past several years (since June 2012). 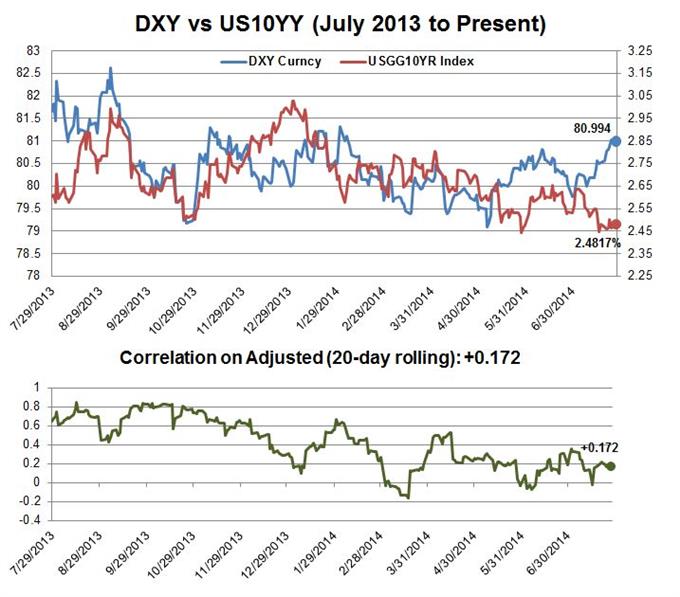 Nevertheless, the greenback finds itself on the precipice of strength versus several of its major counterparts. The rolling 20-day (four-week) correlation between the traditional ICE Dollar Index (DXY) and the 10-year US Treasury yield (USGG10YR) is only +0.172, well-below the yearly high of +0.668 set on January 30. There is a disconnect: weaker yields at the long-end of the curve aren't translating into US Dollar depreciation.

See the video above for technical outlooks for EURUSD and USDCHF as they appear primed for further moves around 1% of their current price, while GBPUSD nears critical channel support of its uptrend from November 2013. Also discussed is USDCAD (on our radar for the past three weeks) as it nears its C$1.0815 breakout level.