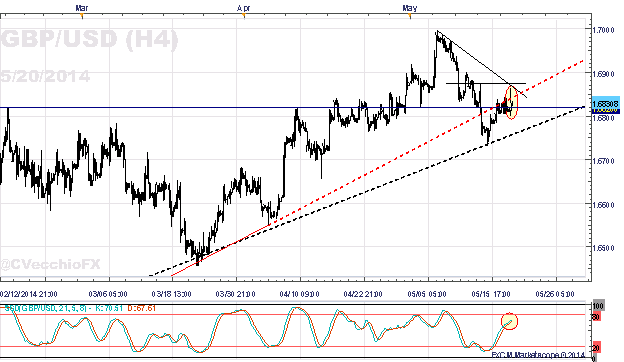 - The forex economic calendar was packed with ‘medium’ and ‘high’ event risk today.

The British Pound has gyrated between its daily highs and lows versus several of its major counterparts this morning after the April inflation report offered nothing short of a confusing snapshot on price pressures in the UK. While all of the headline metrics appeared to show increasing rates of consumer inflation (+1.8% from +1.6% expected, core +2.0% from +1.6% (y/y)), the Sterling’s gains may have been thus far stymied by two important points.

Consider that the producer price index, often seen as leading the consumer price index, saw a massive plunge in April in the output core (-1.1% from -0.4% (m/m)), and there’s little reason to believe that producers will need to pass on costs to consumers – a potential weight to further advances in inflation in 2014.

Additionally, the impact of rising transportation costs can’t be understated: the UK ONS in the inflation report’s release noted that, “Increases in transport costs were the largest factors behind the rise. There were overall increases in the region of 20% on the month with the timing of Easter this year a likely factor. Petrol and diesel prices also played a part.”

The data today ties back to the Bank of England’s Quarterly Inflation Report from last week. Governor Carney had suggested that the main focus of the central bank’s forward guidance would shift to increased attention on the lower levels of inflation, which, at present time, are allowing the BoE to continue to stoke the ZIRP environment. So, despite the shiny headline inflation figures, there’s clearly internal weakness that takes away the sting of the data, leaving the British Pound walking on eggshells as we enter mid-week:

- GBPUSD had previously set a pivot near $1.6875 and today’s pin bar shows a high falling just short of that resistance level.

- Although the trendline supporting the lows from February and March remains in play (where the low was set last week), a daily close under $1.6820 would give further confidence for a breakdown.

- Only a close through $1.6875 will see the downtrend from the yearly highs set at the beginning of May broken; it is worth noting that the Slow Stochastic oscillator is converging towards a sell signal. 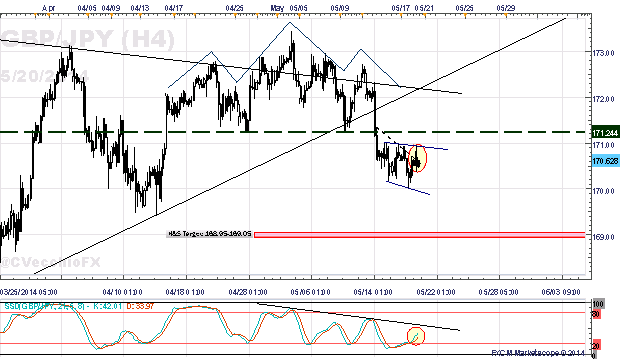 - GBPJPY offers the clearer setup, be it bullish or bearish; this is simply a cleaner market than GBPUSD right now. There are several important developments to note, however:

- Big picture: price has undercut the trendlines going back to (separately) the November 2012 and April 2013 lows, the beginning of BoJ speculation and the actual implementation of BoJ easing, respectively. The latter is represented by the ascending black trendline on the chart.

- While the prior developments are bearish, the near-term may be seeing exhaustion to the downside.

- A descending, broadening wedge has formed over the past three days; and although price was capped by ¥170.95/171 once more today, a break through this level, alongside the Slow Stochastics turning higher, would market a potential bottom.

- With the base of the broadening wedge sitting near the H&S neckline near ¥171.25, we’ll use this level as a reference for our bias over the next few days: bearish below, flat above.