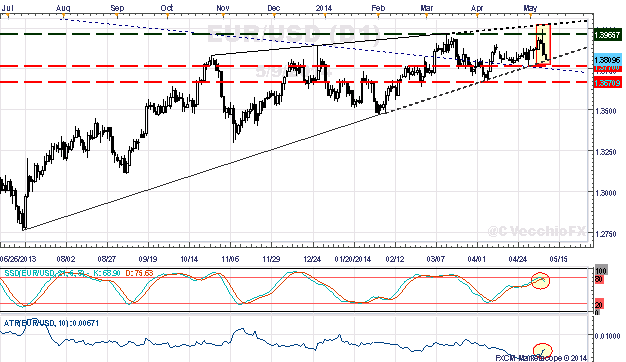 - The ECB may have backed itself into a corner yesterday by promising June action.

- EURJPY risks losing trendline from April 2013 – when the BoJ stepped up its QE program.

The Euro has been one of the more resilient currencies over the past year, continuing its march higher in the face of low inflation and persistent threats from the European Central Bank to intervene in some capacity. Yet in light of the ECB’s press conference in which President Mario Draghi said that the Governing Council was ‘comfortable’ with acting in June, the ECB has backed itself into the proverbial corner.

At the current juncture, the ECB has now enhanced its forward guidance with the promise of more dovish policy action one month from now. At face value, a small rate cut seems like the most probable outcome, as President Draghi did not explicitly say that QE was coming. But the message was clear: after months of jawboning, there is now a veritable checkpoint down the road to look out for in the coming weeks.

The problem with planting a flag for action one month from now is that if the ECB does not do anything, it stands to lose a fair amount of credibility; the likelihood that the Euro would rally sharply in the wake of inaction once more seems like a fairly high probability in light of recent history. Implicitly, the ECB now has no choice but to act.

Normally, such talk of dovish action has proven cheap, as evidenced by the EURUSD hitting a fresh 2014 high yesterday just short of $1.4000. This time may be different, however. While more ECB jawboning wouldn’t be enough to explicitly provoke a bearish bias in the Euro, the technical damage being done across the EUR spectrum suggests that a more significant top in the Euro could be about to trigger.

- EURUSD may be in the midst of a rising wedge on the daily chart; the pace of higher highs has tailed off since October 2013 and the recent high showed truncation relative to the projected trendline.

- A bearish key reversal formed on the daily chart on the ECB meeting yesterday, coinciding with a false breakout to new yearly highs at $1.3993.

- The recent spike in volatility (10-day ATR now 67-pips) has coincided with declines, whereas the prior weeks had been marked by the EURUSD grinding higher and volatility dropping.

- The Slow Stochastic oscillator has issued a sell signal above 70; the last time coincided with the high in mid-March.

- There is a confluence of support at $1.3770 that could be the make-or-break level for EURUSD: recent swing support during late-April; and the uptrend from the July 2013, February 2014, and April 2014 lows. 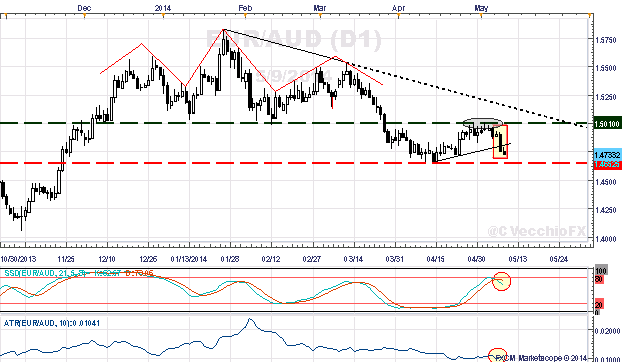 - EURAUD made a countertrend move back to the neckline in the head & shoulders topping pattern, but ultimately failed to retake the key A$1.4995/5015 area. This is a picturesque example of former support serving as resistance.

- The countertrend move from the April lows lost its uptrend on yesterday’s breakdown.

- The Slow Stochastic oscillator has issued a sell signal. 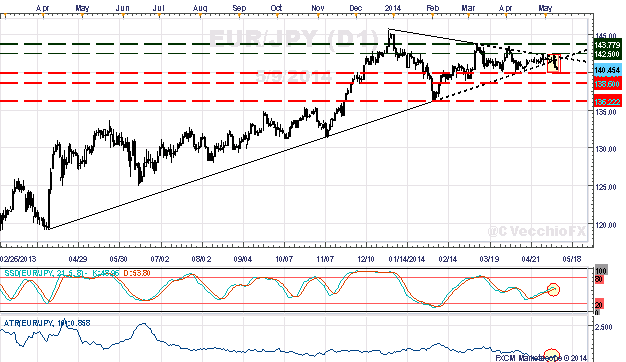 - EURJPY is probably the ‘scariest’ looking chart for the Euro right now.

- Price has lost the key uptrend dating back to April 2013, when the BoJ announced the expansion of its QE program and the leg of Yen weakness restarted.

- The breakdown through the April 2013, November 2013, February 2014, and April 2014 trendline coincided with a failure to breakout higher yesterday; and a bearish key reversal formed on the daily chart.

- The Slow Stochastic oscillator has issued a sell signal.

- A breakdown in global equity markets would accelerate weakness here; a move under ¥139.90 would offer a stronger confirmation signal.

Have a bullish (or bearish) bias on the Euro, but don’t know which pair to use? Use a Euro currency basket.