- US yields continue to plunge at the long-end of the yield curve.

- Previous instances of US yield curve bull flattening have hurt the US Dollar, US stocks.

- USDJPY could be next domino to fall.

Recall the article last week in which we discussed the implications of US yields falling further (see here). Our prognosis was that if the 10-year US Treasury Note yield dropped below 2.58%, the US Dollar could see a more difficult period ahead; the bull scenario would only kick in should the 10YY exceed 2.82%. With the 10YY yield dropping as low as 2.568% today, US Dollar bulls should be cautioned going forward.

The decline in US yields, and therefore, the US Dollar’s appeal over the last two days is directly related to disappointing US Nonfarm Payrolls report on Friday. Although the headline at +288K was the best such rate of jobs growth in two years, the rest of the report rang hollow as the decline in the unemployment rate can be full explained by the drop in the participation rate; overall, over -800K people left the labor force.

The type of action seen in the US yield curve the past several weeks, and accentuated the past two days, is what’s known as a ‘bull flattener’: when long-term interest rates fall faster than short-term interest rates. The 30-year Bond yield has been in freefall in Q2, having declined by just under 24-bps the past four weeks. Even secondary tier US economic data has proven helpless in boosting the buck. 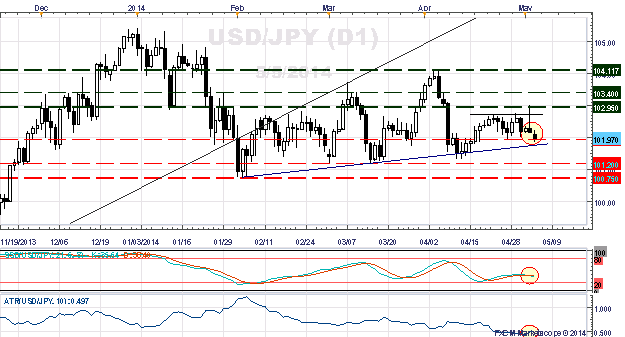 - USDJPY has disconnected from US yields, insofar as the drop in yields would suggest that the USDJPY should be trading lower, near ¥100.75.

- The Slow Stochastic oscillator has flipped bearish as of May 1. 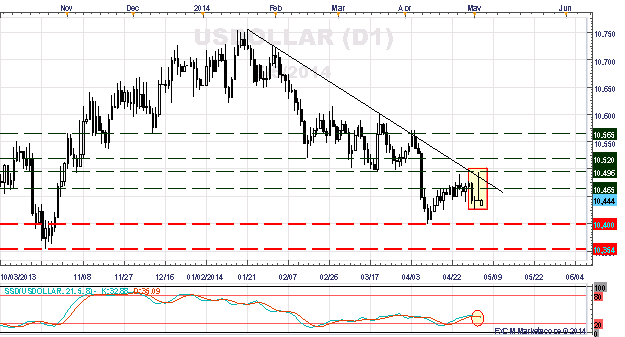 - The bearish hammer occurred at a former level of support near 10495, where price had bottomed out during late-March and early-April before spilling over.

- The downtrend from the January and March highs remains, with the most recent rejection coming on Friday.

- Only a weekly close through 10495 will warrant a reconsideration for a bullish bias.