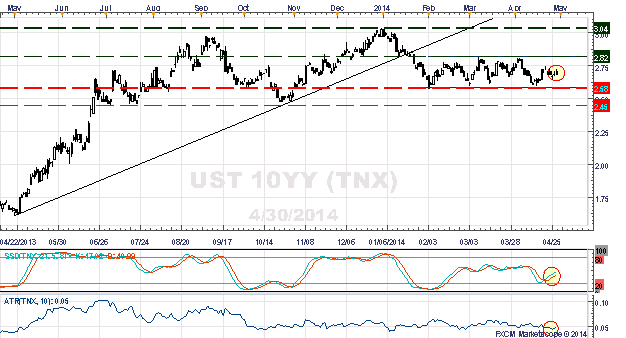 - EURUSD remains poised to funnel into triangle vertex by next week.

- USDJPY’s lack of enthusiasm for US equity rally can be attributed to lack of yield momentum.

FX markets remain asleep at the wheel despite increased volatility in commodities, but if there was ever a time for the volatility lull to end, the next three days might present the best opportunity to do so in the near-future.

Put simply, it would be quite surprising if the recent low volatility period was able to withstand the onslaught of the Q1 US GDP release and the Federal Reserve policy meeting today, the April ISM Manufacturing report tomorrow, and the April Nonfarm Payrolls report on Friday.

Yet before we get too far ahead of ourselves, there is definitely one instrument that will need to become more active over the next few days if the USD-based majors are to wake up: the US Treasury 10-year Note.

2014 was supposed to be the year that QE ended and financial markets started to cope with a rising rate environment. The chart above shows just how wrong conventional wisdom was. The UST 10-year yield has been ranging in a tight 25-bps sideways channel between 2.58% and 2.82% since the end of January. Volatility is low here, too: the average range over the past 10-days is a mere 5-bps.

The concurrent volatility compression in yields and in the broader FX market can actually be an advantage for traders. With such tight ranges having developed, it’s evident that the low volatility has played into the hands of range traders rather than breakout or momentum traders; thus a pick in volatility accompanied by a directional breakout in the UST 10-year yield above 2.82% or below 2.58% could be representative of a regime change beginning to occur across the interest rate spectrum. A break of this range will help relieve both the EURUSD and USDJPY from their tightly-wound states ahead of significant US event risk this week. 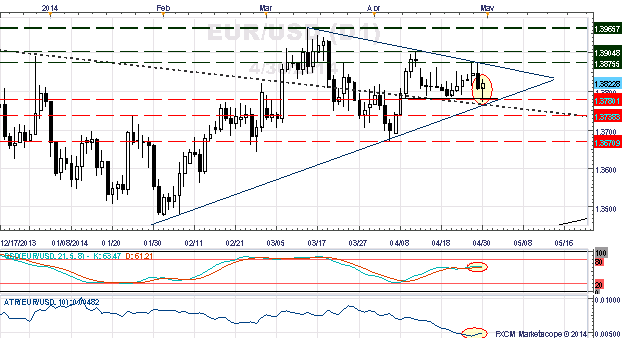 - Technically, EURUSD remains above the descending trendline from the 2008 and 2011 highs, keeping open the possibility of a longer-term breakout high.

- In the medium-term, EURUSD is nearing a key decision moment as it channels into the narrowing support/resistance range dictated by the descending TL from the March and April 2014 highs and by the ascending TL from the July 2013 and February 2014 lows. 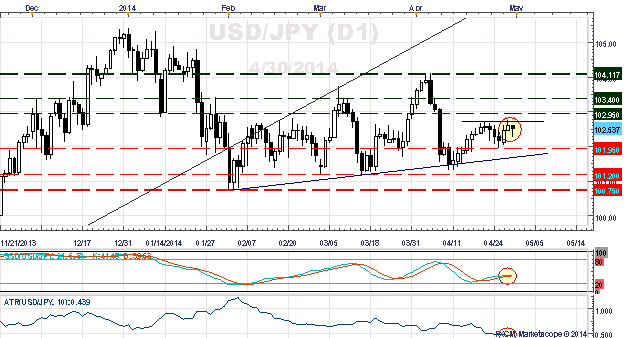 - USDJPY has been a near-perfect mirror image of US yields’ sideways price action the past few months, though it has traded with a slight upside bias as global equity markets remain overall elevated.

- In the short-term, ¥102.75 has already provided trouble to the topside this week, though the real comfort level to achieve for further topside gains would be ¥103.40.