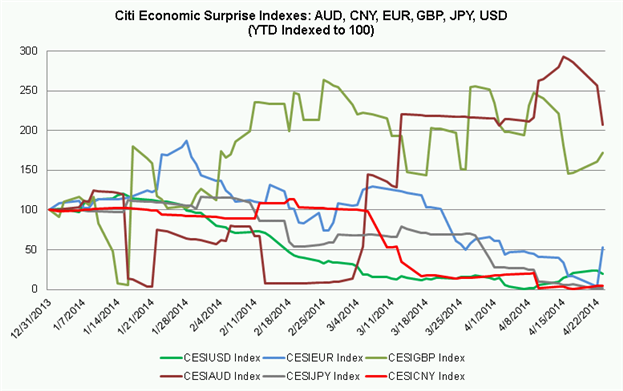 - EURUSD peeking out of triangle to upside, faces trendline test from March and April highs.

The major European currencies could be close to a crucial turning point versus the US Dollar over the coming days. However, low volatility has restrained significant moves. In fact, EURUSD 10-day ATR (average trading range) has fallen to its lowest level since mid-2007 – right before the major explosion of volatility that dominated 2008-2011, of course.

That’s not to suggest another 2008 crisis is coming; but rather a commentary on the complacency of market participants in recent weeks. Patience is required in this current market atmosphere. Thankfully, activity on the fundamental front has provided the potential tinder for greater action over the coming days.

While the US Dollar was beginning to benefit from signs of improved economic data, there is now evidence just over the course of a few short days that US momentum is fading while that in Europe is gaining. Both the Euro-Zone and United Kingdom Citi Economic Surprise Indexes have rallied in recent days, with the Euro variation showing marked improvement on the heels of the April PMI numbers.

As a result of the recent shifts in fundamental momentum, we’re continuing to monitor the EURUSD and GBPUSD for potential breakout opportunities should the low volatility environment dissipate. Both pairs are holding up well in recent days despite the rebound in US Treasury yields. 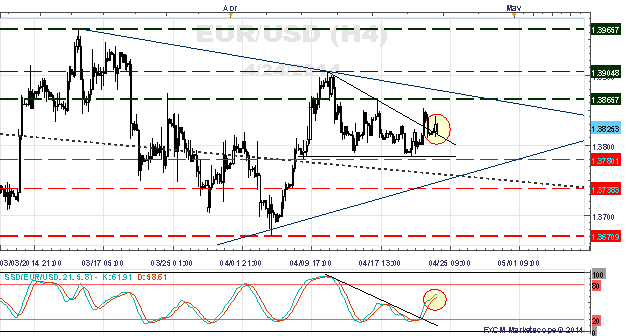 - Now that Euro-Zone economic data is turning around, the staying power of the European Central Bank’s dovish jawboning (threat of QE) without any substantive action is fading once again.

- Technically, EURUSD remains above the descending trendline from the 2008 and 2011 highs, keeping open the possibility of a longer-term breakout high.

- In the medium-term, EURUSD is nearing a key decision moment as it channels into the narrowing support/resistance range dictated by the descending TL from the March and April 2014 highs and by the ascending TL from the July 2013 and February 2014 lows.

- In the short-term, EURUSD has peeked higher out of the triangle developed since April 8, yet has failed to make meaningful progress alongside the rebound in the Slow Stochastic indicator.

- For bears, a break under $1.3780 could signal a return to the ascending trendline that’s supported price since the July 2013 low. 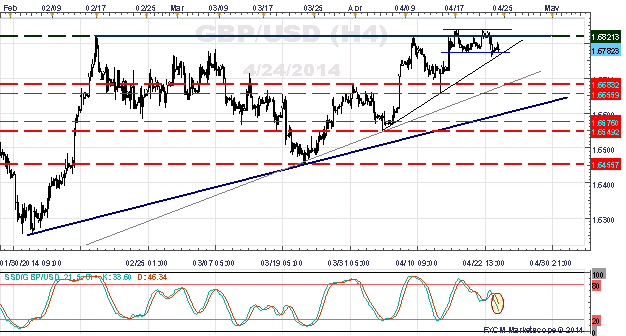 - GBPUSD may be in the midst of a two month long ascending triangle formation, beginning back at the lows seen on February 4 to 7.

- Resistance in the triangle formed against $1.6840, with the most recent failures coming after April 9.

- The past three days price has consolidated into a minor flag (red) between 1.6773 and 1.6840 – these levels mark either side of the range to engage should a breakout opportunity arise. A move through 1.6840 would immediately draw attention for a move towards 1.7000.