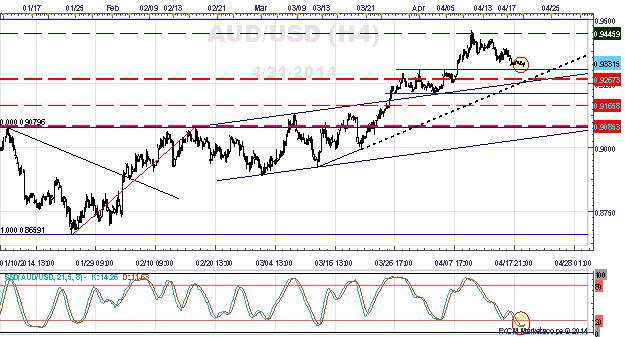 - AUDUSD remains above a prior breakout level, yet to achieve inverse H&S target.

- EURUSD more neutral as currently trades within a symmetrical triangle.

Over the past five years (QE era of central banks), April has been the worst month during the year for the US Dollar, and this year has proven no different. Down by -0.3% to -0.9% versus the Australian Dollar, the British Pound, the Euro, and the Japanese Yen each, the buck’s stumble in the fourth month of the year is undoubtedly related to the continued string of disappointing economic data.

In fact, the Citi Economic Surprise Index fell to -45.9 on April 7, its lowest level of the year, in the wake of the disappointing March Nonfarm Payrolls report. Hope may have been born again recently, after a series of improved consumption and inflation reports this week; the same surprise index has rebounded to -26.3. If US Dollar strength is to reemerge, the slight rebound in economic data will need to gather pace and push up US yields once more.

At the beginning of the year, the 2s10s Treasury yield spread was 264-bps; now it is 231-bps, just off of the yearly low of 223-bps. A widening spread – steepening yield curve – would be indicative of improved US growth prospects, improved inflation expectations, and a stronger foundation for the US Dollar to regain some of its shine after a less than spectacular start to 2014. Here are two setups we’re watching for the last full week of April:

- AUDUSD has been underwhelming the past several days, fading away from its 2014 highs near $0.9460.

- Price has maintained elevation above former flag resistance at 0.9305; as well as former rising channel resistance now at 0.9260; as well as the the ascending trendline off of the April 12 and April 20 lows.

- The Slow Stochastic indicator has reached oversold conditions above a former breakout level, perhaps suggesting that the previous overextension has been ‘digested.’ 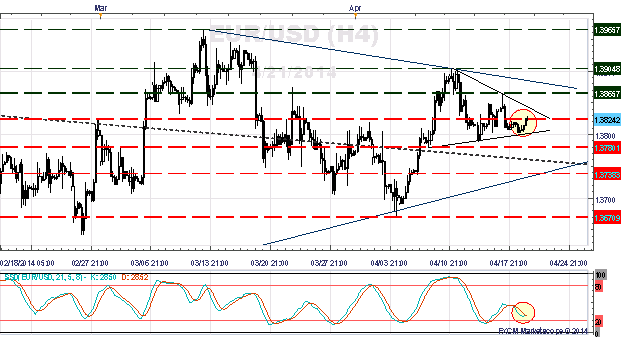 - The Euro’s fundamentals have been steadily deteriorating the past several weeks, but market participants clearly need to see more from the European Central Bank before trading down the currency.

- The EURUSD has entered a symmetrical triangle pattern on the H4 timeframe, offering opportunity to both bulls and bears alike.

- In the near-term, a break under $1.3780 could signal a return to the ascending trendline that’s supported price since the July 2013 low, coming in near 1.3740 over the next few days.