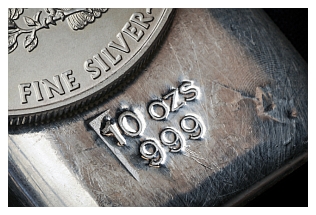 Silver Prices to Go for a Ride with ECB, NFPs Next Two Days

- Precious metals’ sensitivity to yield environment will be on full display.

What is the outlook for silver prices? History may not repeat exactly, but it certainly rhymes. The market is no different, which is why we’re looking attentively to precious metals prices over the next 48-hours thanks to a super saturated economic calendar to finish the week.

On Thursday, the European Central Bank (ECB) meets in a meeting brimming with potential for additional easing measures. On Friday, the highly regarded US Nonfarm Payrolls report could deflate any fundamentally bestowed optimism for looser monetary conditions, at least from the Federal Reserve. Both days offer veritable catalysts for significant volatility in precious metals – especially out of silver prices.

The rally in the precious metals complex in Q1’14 was noticeably lacking one thing: Silver prices leading the way. This was the case during the QE run up into 2011, with the Gold/Silver ratio falling to as low as 30.5121 on April 25, 2011. The lack of enthusiasm for speculation over further easing diminishing the value of fiat currency has certainly dampened enthusiasm for silver, with the gold/silver price ratio currently at 63.9428. 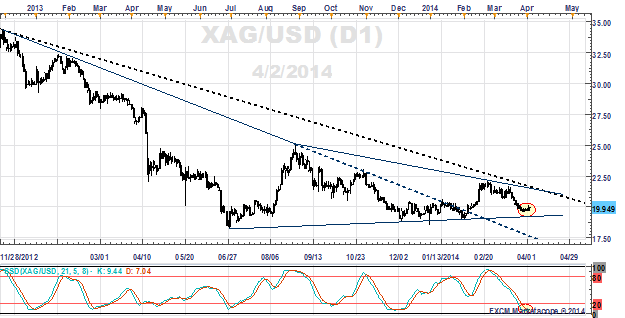 We point out the gold/silver price ratio simply because during the bubble blowing phase of the commodity cycle (2009-2011), silver led the way; the recent 10% rally in the ratio from the February lows near 60 to the March highs near 66 shows that even during the recent swell of fear in the markets – onset by geopolitical tensions building in Eastern Europe (Crimea) – gold was the preferred safe haven.

Now that said geopolitical issues have simmered, focus has swung squarely back to the prospect for additional monetary easing. If recent price action is any indication, then it would seem the market has priced in a relatively higher yield environment over the past week.

The silver chart above illustrates the recent failed breakout attempt. Silver prices climbed through the descending trendline off of the November 2012 and August 2013 highs, but failed at an attempt to take a longer-term downtrend dating back to silver’s high near $50 in 2011. 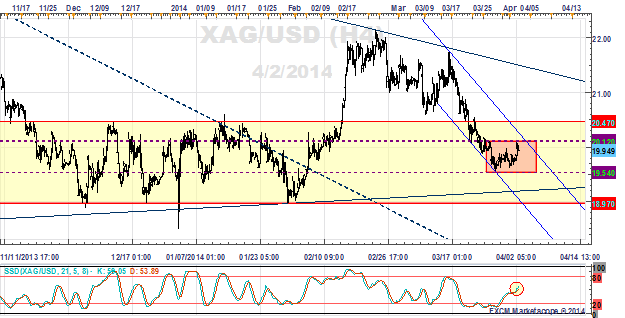 The H4 chart illustrates how the recent downswing unfolded in a rather quick manner from the middle of March forward, sending silver prices back into a familiar range (since mid-November 2013) between $18.970 and $20.470. The past few days, silver’s price has consolidated in a rather tight range as highlighted by the shaded red box on the chart, between $19.540 and $20.120.

Technically speaking the failed breakout and return to the range from November 2013 would call for a consideration lower. But in context of the two significant events around the corner, and silver prices now in the middle of the range, traders just arriving to the scene are at least offered distinct support and resistance points close by to judge the next move.

Silver’s weakness in 2014 – or lack of leadership relative to gold – will be put to the test over the next two days. The best case scenario for silver prices would be an aggressively dovish ECB, indicated by fresh non-standard easing measures and possibly lower if not negative interest rates. Concurrently, a miss on the US Nonfarm Payrolls report – a sign that the Fed has misjudged the pace of the recovery and therefore could attempt to keep yields lower for longer, eroding the value of the US Dollar – would also be bullish for silver. In this case, a rally back through $20.120 and $20.470 would be eyed, allowing for a test of the downtrend from the 2011 high.

The bearish outcome for Silver prices is more daunting as it would present the immediate challenge of the 2014 and late-2013 lows near $18.970. If the ECB holds back from a massive liquidity injection (or promise to do so in the future; markets are forward looking) and the US Nonfarm Payrolls report comes in above +200K (prompting a rise in US yields, and therefore, the US Dollar which Silver is priced in), it could be a quick slip towards fresh lows in the mid $18s just as Q2’14 gets underway.

-Keep track of events on the DailyFX Economic Calendar