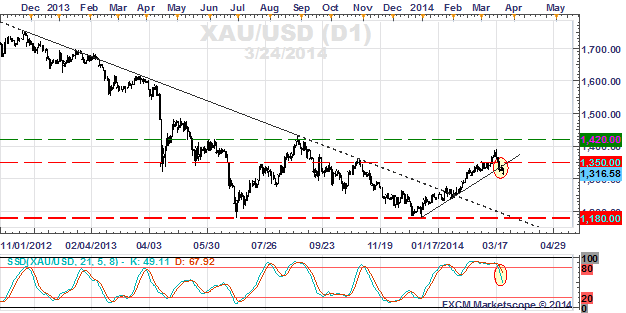 - Jump in short-term US yields (<1Y) after FOMC concerning for precious metals.

- Higher US yields and stronger US Dollar will only hurt Gold prices, Silver going forward.

Gold's price has had a modest, consistent rally in 2014, breaking the downtrend from late-2012, and the viability of the recent move hinges on the continued development of these two themes: the Fed taper (or lack thereof); and Russia’s westward incursion. These influences are becoming less prominent, allowing precious metals’ prices to fall over the last several days. Evidence is mounting that the rally in Gold prices in the first quarter of the year may have been a temporary occurrence.

Gold’s recent source of luster – rising geopolitical tensions in Eastern Europe – has waned considerably. The destabilization of the Ukrainian government in November after a botched trade deal with the European Union didn’t prove to be a bullish catalyst at the time. But as it became clear that major players in the United States and Russia would square off diplomatically, the specter of armed conflict allowed Gold to stay in the limelight – until now.

The FOMC rate decision last Wednesday may have been the event to mark the near-term top in Gold now that geopolitical pressures have started to ease. With chatter that the Federal Reserve could hike interest rates as soon as within six months of the end of QE3 (currently on pace for the fourth quarter of 2014), a jump in short-term US yields (less than 1Y in maturity) has boosted the value of cash in the near-term – and therefore reduced the appeal of yield-less instruments like precious metals.

The philosophical underpinnings of these events must be ignored by traders – they are easy distractions and can lead to “paralysis by analysis,” or overanalyzing the conditions impacting the instrument, in this case, Gold. Questions such as “should the Fed taper” or “is Russia violating international law by annexing Crimea” are best left unanswered.

Instead, we’re looking to answer one simple question: “what is the chart revealing?” Turning to the chart will give the best insight as to what the collective opinion of the market is on these issues. 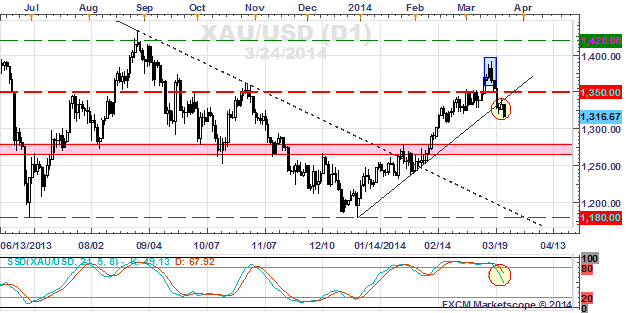 The bearish key reversal/engulfing candle from last Monday – the day after the Crimean elections and right before the FOMC meeting – has proved to be a meaningful reference point. Now the 2014 uptrend has been broken following the last four days of price action, we are treating the $1392 high in the bearish reversal candle cluster as the necessary level to regain full confidence in a Gold price rally. 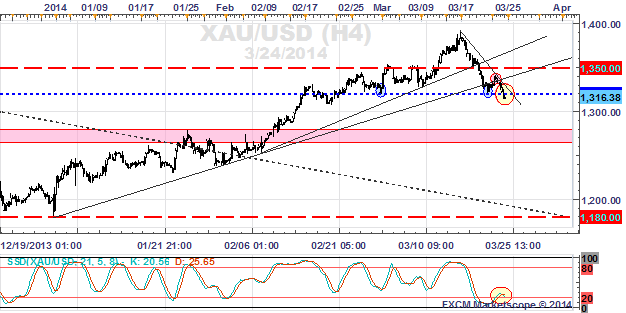 A review of the H4 timeframe is rather revealing about the developing weak structure of Gold prices in the short-term. The first level of support that should have held was 1350, a level that proved as resistance earlier in March. This also coincided with the uptrend from the February 6 and March 7 lows.

The Gold breakdown has appeared to gain credibility the past several sessions, with price breaking through 1320, a level that served as support in Gold’s rally in early-March. Gold is now exposed for a larger correction back towards 1260/1280 (support and resistance on multiple occasions from June 2013 to present).

Where do the fundamental stories fit in with these levels? Another bout of tension foreshadowing military action in Eastern Europe has proven to be a bullish catalyst; inaction or no further breakdown in diplomacy is bearish (currently playing out). Even as the Fed tapers, markets are forward looking and therefore will be looking for signs about future policy – for now, the price of Gold may be indicating that a more hawkish Fed has spoken.