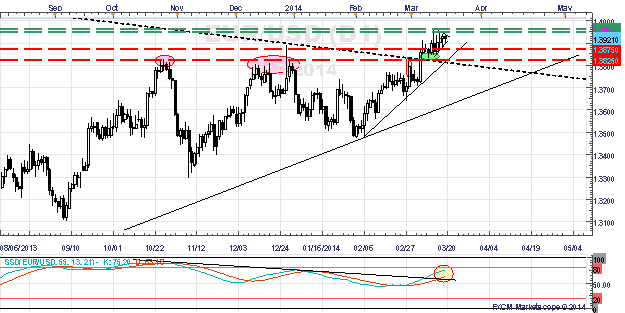 - US Dollar has struggled in wake of prior tapers.

The Federal Reserve’s March policy meeting today should help relieve frustrated FX traders from the recent swoon in volatility. Another $10B cut to QE3 is widely expected, given the downward pressure on the unemployment rate (now 6.7%) and the steady pace of jobs growth (12-month average now +179.8K). As a result, this FOMC meeting as a bit of a wrinkle that could spur significant price action, depending upon the outcome.

The main issue facing the FOMC right now is what to do about forward guidance as the unemployment rate hits the 6.5% circuit breaker, at which point the Fed had first indicated it could begin to raise short-term interest rates. But commentary in recent weeks has suggested a more concerted shift towards qualitative guidance, in which the FOMC promises to keep interest rates low beyond the 6.5% unemployment rate threshold.

With a $10B taper as the baseline scenario – and therefore a neutral outcome – market participants will be eying the changes to forward guidance and the unemployment rate circuit breaker for bias. A dovish outcome would see the FOMC remove the 6.5% circuit breaker and promise to keep rates low beyond the complete wind down of QE3. This would indicate the first rate hike would likely come in the first half of 2015. A hawkish outcome could be as simple as the FOMC not changing its forward guidance policy.

As traders await the FOMC meeting to conclude, the EURUSD is engaged in a consolidation pattern that can often precede a breakout (as is the USDJPY). Today is a perfect storm of fundamental event risk and actionable trade setups.

Our first chart is the EURUSD daily perspective, which draws attention to the $1.3825 area. In October and December 2013, price was unable to climb through this resistance on a daily closing basis; there are several wicks into this price but nothing more. The same can be said about the move up in late-February.

The overhead supply dissipated once the calendar turned to March, and the EURUSD was able to climb through the descending trendline from the 2008 and 2011 highs. A look at the H4 timeframe on the next chart highlights the evolved relationship: 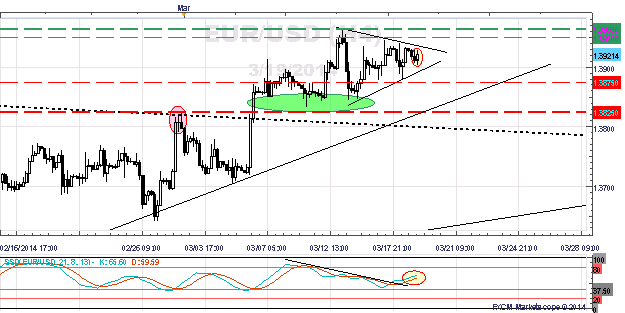 Ahead of the FOMC meeting, we see on the H4 timeframe that a symmetrical triangle has formed above the 1.3825 pivot area. After the break above 1.3825 on March 6, subsequent selloffs into price above 1.3825 proved to hold a supply of willing buyers.

The EURUSD remains bullish, and in context of the breakout of the 2008-2011 downtrend and above 1.3825, our bias is for the symmetrical triangle to break higher. However, with respect to a neutral mindset, bulls will need 1.3950 and 1.3965 for a bullish breakout. To the downside, 1.3875 and 1.3825 would need to break for bears to take control. Below 1.3825 would also represent a break of the uptrend from the February low.