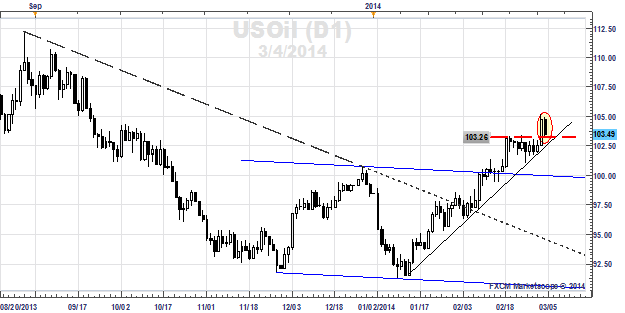 Conflict is brewing in Eastern Europe and it’s led to a surge in volatility across asset classes the past few days. Russian military forces have entered the southern Crimea region of Ukraine on the premise of providing security to ethnic Russians during an “unconstitutional coup,” as Russian Federation President Vladimir Putin described this morning.

With East-West tensions building, investors have been faced with the task of putting their capital to work after most of the fireworks resulting from the crisis took place over the weekend. The damage was essentially done by the time investors could respond on Monday; and all of the price action that jarred markets was essentially reversed after Tuesday’s commentary from President Putin.

Outside of observing what has already happened, it is a hapless endeavor to try and predict the outcome of such a fluid, emotional geopolitical conflict. The market has revealed its ‘Ukrainian crisis playbook” to traders the past several days.

It’s not surprising that the negative news over the weekend led to a gap open lower in risk-correlated assets on Monday. Stock markets fell around the globe, and the S&P 500 (Ticker: SPX500) opened the week by nearly one percent lower. Most notably, commodities benefited at the start of the week as the specter of conflict between Russian-backed forces and West-backed forces (NATO) looked like a possible outcome.

In particular, Crude Oil (Ticker: USOIL) jumped by nearly two percent to start the week. In the event of the Ukrainian crisis flaring again, oil has the distinct possibility of being the most vulnerable for moves in either direction. Primarily, this has to do with the role of Russia as an energy producer and Ukraine’s role as an intermediary. Approximately two-thirds of Russian gas that goes to the European Union travels through Ukraine, for example.

The reaction the past two days has been symmetrical: those instruments that benefited from rising tensions over the weekend (Gold (Ticker: XAUUSD), USOIL, and the Japanese Yen) have yielded the past several hours in favor of those that suffered (SPX500 and USDJPY).

In USOIL in particular, the past two days of price action have produced what may be a false breakout of a range that held in the last two weeks of February. Price had consolidated between 101.06 and 103.26, with Monday’s gap open marking the breakout.

However, the cooling of said Russian-Ukrainian tensions can be considered a bearish fundamental development for USOIL. The limited prospect of damage being done to either the physical pipelines that transport Russia’s energy to Europe or to EU-Russian trade arrangements reduces the chance of “supply shock.”

Today, an Inside Day has formed thus far. This price action could be indicative of a pause in trend; and in context of Crude non-commercial/speculative positioning at an all-time bullish high, a greater calming in Eastern Europe could provide the fundamental spark for a profit-taking/covering sell-off.