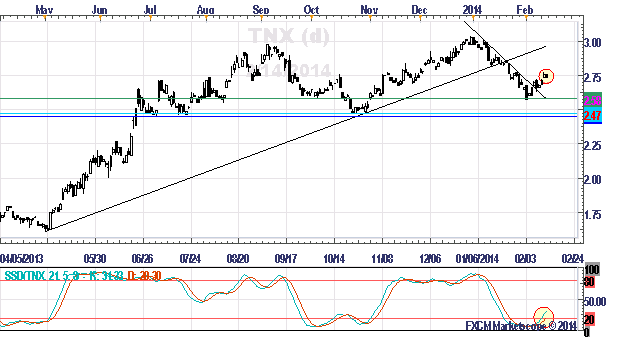 The Tides are Turning against the US Dollar: EUR/USD, USD/JPY, Gold

- US yields remain weak as US consumption and labor data soften.

- Environment reminiscent of 2009-2011 – US Dollar suffering at expense of everything else.

‘The year of the US Dollar’ might be an appropriate summary for the consensus estimate on the street for which currency would be the top performer in 2014. Backed by the Federal Reserve’s plans to wind down its QE3 stimulus program, a rising interest rate environment was supposed to be the backbone of greenback strength. Yet the first several weeks of 2014 have proved everything other than these platitudes to be correct. Perhaps aptly, our focus today is on why the US Dollar has been such a heartbreaker.

It’s impossible to ignore the coincidence of US Dollar weakness with the sudden slump in top of the line US economic data. The US Dollar pain trade really began on January 10, when the market was stunned with a +74K (later revised to +75K) December NFP print. The US Treasury 10-year Note yield, hovering near 2.98%, plummeted into the mid-2.80s and never looked back.

The decline in yields coincided with a break of the uptrend off of the April and October 2013 lows, and the UST 10YY dropped to near 2.580% within the past three weeks. The US Dollar hasn’t had it any easier.

While the downtrend from the highs earlier this year has been broken – and the UST 10YY has traded through its post-January NFP high (which is notable, because it was another disappointing US jobs report) – the bounce has been thus far uninspiring.

More importantly, the return of rising US yields from their recent lows hasn’t done much to help the US Dollar. One instrument in particular is warning of further US Dollar weakness: Gold. Indeed, our Speculative Sentiment Index update this week has issued caution given extreme positioning in several US Dollar pairs. 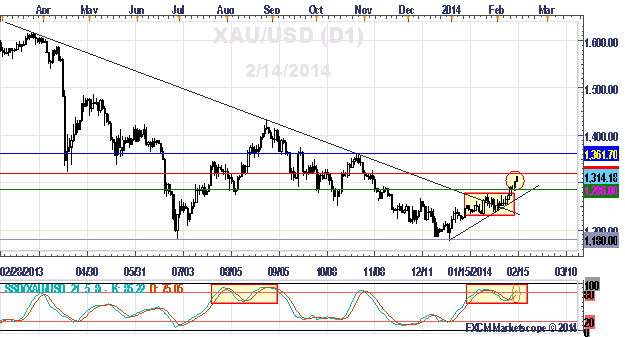 - Gold (XAUUSD) broke the downtrend from the March, August, and October 2013 highs in early-February, but had little success in immediately breaking out of the downtrend until this week.

- Support in the breakout next week extends to 1286 (green horizontal) for Friday’s close; below there the uptrend from the January lows will have been broken.

- Initial resistance comes in at 1320 (red horizontal), the former major low during the sharp selloff in April 2013.

- A more aggressive Gold rally could extend to 1361 in the near-term (blue horizontal).

If our analysis of Gold shows that one of the weakest asset classes of 2013 is starting to rebound in a more promising fashion – predicated on weakening US economic data – then the US Dollar looks especially vulnerable. Over the next several days, as the US Dollar struggles despite recently elevated US yields, there are potential setups in EURUSD and USDJPY to watch for on lower timeframes. 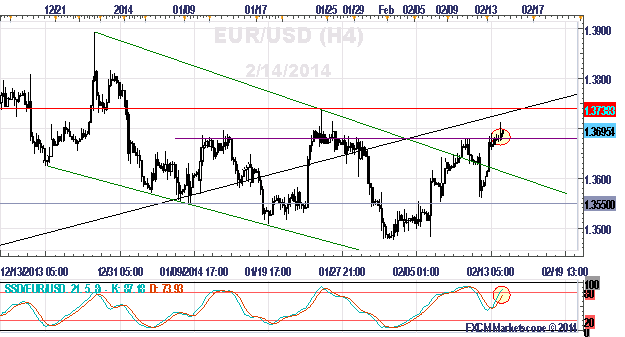 - The EURUSD has broken resistance, the descending trendline off of the December 2013 and January 2014 lows; price is also settling above $1.3680, the confluence of this descending TL as well as former support, the ascending TL off of the July and November 2013 lows.

- The Slow Stochastics (21,5,8) have turned higher on the H4 timeframe after resolving its overbought condition and yet price retained its elevation.

- However, as seen on the H4 chart, price remains below the former TL support, which we are now treating as resistance. The last swing high in the downtrend came in at 1.3735/40, which intersects the former support TL on February 17/18.

- Therefore, if EURUSD strength is to materialize, we would be looking for price to settle above 1.3740 early next week. 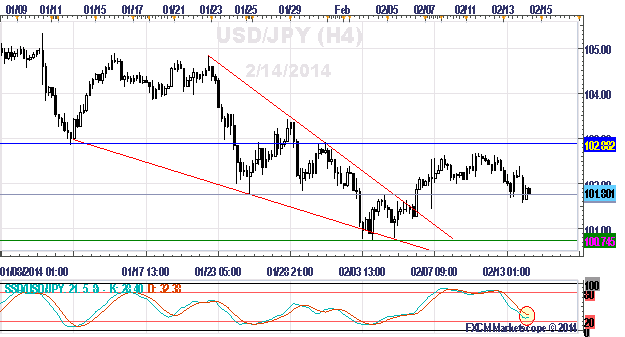 - The USDJPY attempted to rally out of a Bullish Falling Wedge but failed to make the necessary strides higher.

- The rebound through ¥101.75 was important, but price finds itself back at this support level once again. It was established in late-January and then respected as resistance in early-February.