- European currencies respond to FOMC, trade low versus US Dollar.

- Lots of choppy charts – market is fighting for direction.

The last several days have been dominated by headlines that would normally be associated with a market crash – emergency meetings by central banks in emerging markets in order to protect their currencies from whatever onslaught might by wrought upon them by developed markets’ central banks tightening policies.

Overall it’s a testy situation: the Federal Reserve wants to wind down its expansive stimulus efforts as the US economy improves; but it doesn’t want to disrupt global markets to the point where economic and political stability is thrown into question. Nor is it the Fed’s job to manage the market – if capital was misallocated, then any volatility seen is the result of market forces correcting imbalances.

As emerging market central banks have taken various measures to calm sentiment and reassure the globe that the end of QE3 doesn’t mean economic collapse, a bit of time has been bought thanks to concerted, seemingly coordinated measures from central banks in Central Asia, Latin America, Southeast Asia, and elsewhere. As investors decide their next move, this calm has manifested itself into consolidations in the Japanese Yen crosses. 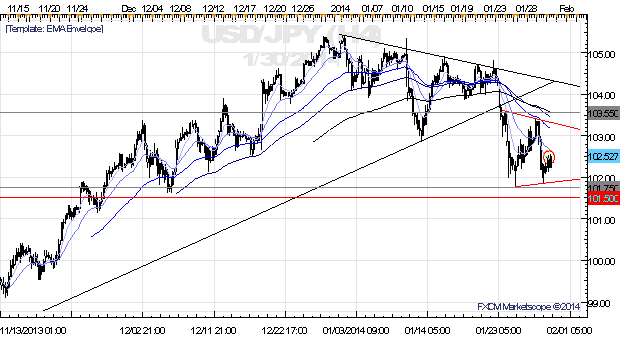 - The USDJPY broke down through the ascending trendline off of the November 2013 and January 2014 swing lows at ¥103.75 last week.

- The pair traded lower to the early-December swing low at 101.75, further supported by 101.50/55, the July high and late-November resistance.

- A series of lower highs and higher lows has formed the past four trading days.

- With price below the November-January uptrend, our initial bias is lower. However, in context of the triangle that is forming (red lines), we are bullish USDJPY above 103.55 or bearish USDJPY below 101.50. I’m not a range trader so I’d prefer to wait on a breakout from this consolidation. 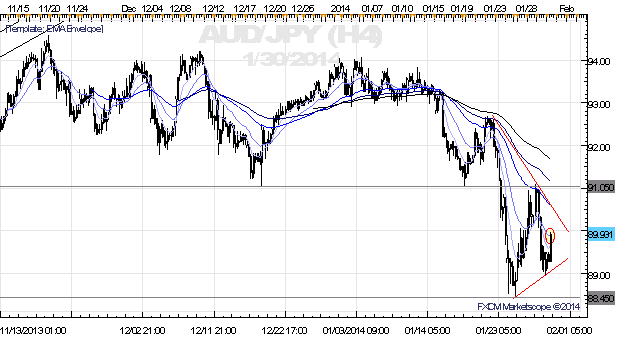 - A series of lower highs and higher lows has formed the past four trading days.

- Price trading below 89.00 would give preference to a bearish bias for AUDJPY under 88.45.

- Price trading above 91.05 would give preference to a bullish bias for AUDJPY above 92.70. 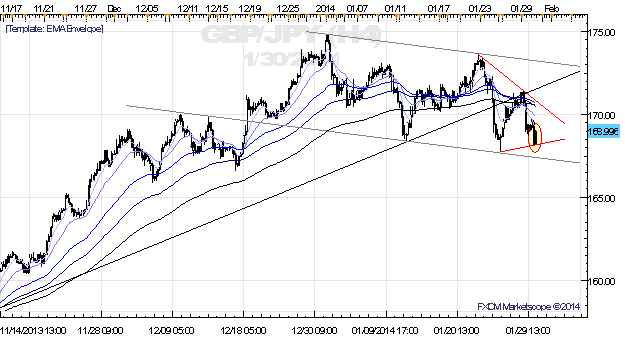 - The pair has slipped below the November-January uptrend, and the attempted retest earlier this week near ¥171.30 failed.

- In context of price action since early-December, a sideways with a slight bias lower may have formed; but the near-term consolidation into a triangle (red lines) suggests a return to the range top or break through the range floor is due shortly.

- A bearish bias for GBPJPY would be warranted under 167.70.

- A bullish bias for GBPJPY would be warranted above 171.30.