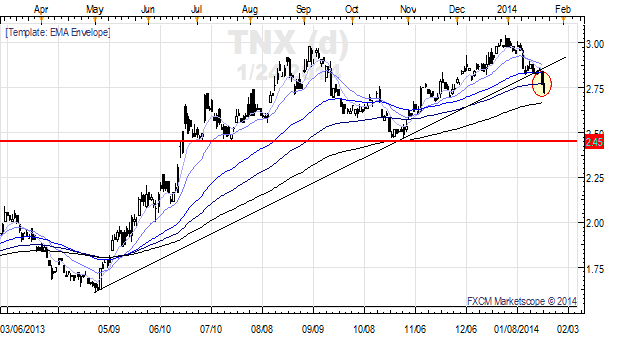 - Combination of weak US data and risk-aversion driving moves.

- Both EURUSD and USDJPY hinting at further USD weakness.

To keep up with the US Dollar's developments ahead of the FOMC meeting, be sure to sign up for my distribution list.

Volatility has come back with a vengeance the past several days, with increased daily trading ranges prevalent across all of the major currencies covered by DailyFX Research. During this time, the underlying “theme” driving the market may have started to shift.

For the US Dollar, this theme has been that “higher yields lead to a stronger currency.” With short-term US interest rates anchored low thanks to the Federal Reserve’s ongoing stimulus efforts, FX market participants have used the more commonly reference US Treasury 10-year Note yield to provide direction. Now, the elevated yield environment – the backbone of the US Dollar for most of 2013 – may be at a turning point ahead of the Federal Reserve’s January 29 policy meeting.

- The UST 10YY recently broke the uptrend off of the April and October lows, with price undercutting 2.850% on Wednesday.

- While the break occurred yesterday (and is ongoing today at the time of writing), there is now reason to believe that US yields have reached a near-term top.

- There is risk for the UST 10YY to fall as far back as 2.500%, which could lead to further USD weakness against the Euro and the Japanese Yen.

- The EURUSD almost broke key support, the ascending trendline off of the July and November 2013 lows; indeed, price settled below this trendline for several days earlier this week.

- However, as seen on the H4 chart, a Bullish Falling Wedge formed against the key support, offering for a move higher.

- A pause in rally may be necessary as the moving average structure evolves more bullish; if a break higher is due, price needs to maintain $1.3650 over the coming days. 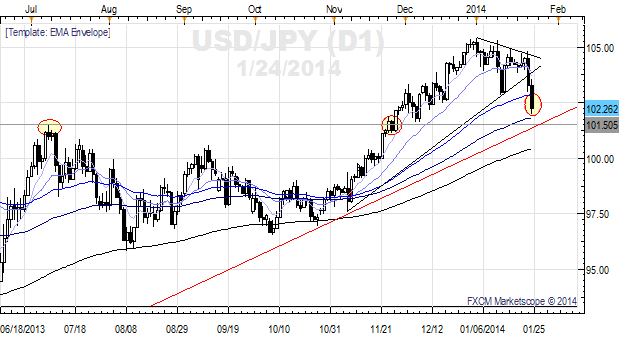 - The USDJPY broke down through the ascending trendline off of the November 2013 and January 2014 swing lows at ¥103.75 yesterday.

- USDJPY at risk not just from US yields, but from speculation around Bank of Japan policy as well.

- First near-term support comes in at 101.50 early next week – and this is a major level of support. A break here could prove devastating for the USDJPY.

- 101.50 represents: July swing higher and resistance in late-November; and the ascending trendline off of the November 2012 and October 2013 lows. A weekly close below 101.50 next week after the Fed could be the indication of a much more significant top.