Overnight Reversal Puts EUR/JPY at Crossroads Ahead of FOMC, ECB

- US event calendar to hold sway over price action in European FX today.

A scan of this morning’s best and worst performers via the Strong/Weak app shows that the losses seen earlier by the Japanese Yen have all but erased on a rolling 24-hour basis, and in fact, the Yen is now the strongest performer intraday on the H1 and H4 timeframes.

Once again, there is a dichotomy in price action in regions, not necessarily by yield. That is, the safe havens aren’t blindly outperforming higher yielding currencies; instead, it is the European region that is suffering overnight as capital flows back East (AUD, JPY, and NZD top three performers on H1 and H4, while CHF, EUR, and GBP are worst).

Steadying in the regional jobless rate and signs that consumption may be rebounding have done little to boost optimism in the Euro today, ahead of the European Central Bank’s policy meeting tomorrow. Since the December French Manufacturing PMI came in at its worst reading in 7-months, spurring concerns of a gathering policy crisis in France, markets have been pressing the Euro lower in anticipation of potential further accommodative policy action by the ECB. Only a near-explicit hint of more easing over the coming meetings will have a lasting, negative impact on the Euro. Accordingly, such sentiment may be helping keep the EURJPY constrained below the bullish breakout level identified earlier this week: 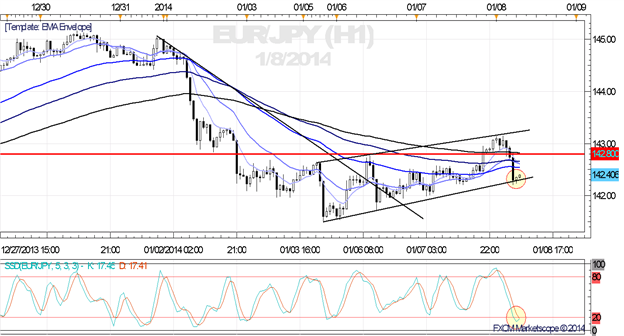 The earlier stated goals for a potential EURJPY trade were:

- A rebound to at least the highs near 145.65 would be targeted; failure to do so might be indicative of a top developing in price.

However, a look at the H1 timeframe shows that the recent attempt to retake 142.80/143.00 (red line on chart, established support and resistance since January 2) has thus far failed.

- In context of price action this week, the EURJPY looks to be constrained to a potential flagging pattern; in the short-term, this may be a sign of a continuation lower; however this is at odds with the multi-month uptrend in price (since November 2012).

- For now, the H1 Slow Stochastics (5,3,3) are in oversold territory and are close to turning higher; both prior bullish and bearish turns over the past two days have helped define the recent consolidation.

The nature of how the indicator reacts relative to price over the rest of this week will help provide a clue for the next direction of the EURJPY:

- A break in to new lows after a bullish turn in H1 Slow Stochastics would suggest the nature of price is changing (no longer behaving like it did during the consolidation). A move below 141.90/142.00 would give priority to a top as a bear flag may have formed with respect to recent declines.

- A rebound in price here would keep the consolidation intact, leaving open the possibility for the original long EURJPY trade parameters to be fulfilled. Today’s price action confirms the importance of waiting on a daily close at or above 143.00 before further gains should be anticipated.

There are no data on the British Pound economic calendar for Wednesday, January 08, 2014.

There are no data on the Swiss Franc economic calendar for Wednesday, January 08, 2014.