EUR/AUD Pullback Accelerates - Is it a Top or a Buying Opportunity?

- No significant data on Euro-Zone calendar on Friday.

- Pound lifted as UK economic data continued to impress headed through the 4Q’13.

- Swiss Franc eases on soft data; looks susceptible to a bigger loss in 2014.

A scan of this morning’s best and worst performers via the Strong/Weak app shows that there has been a massive turn in flows between East and West and North and South: the British Pound and the Euro are each down nearly 1000-pips collectively as the Australian and New Zealand Dollars have been aggressively bought at the same pace overnight.

Although the GBPAUD is the worst daily performer, the EURAUD, EURNZD, and GBPNZD have all spent the past several hours competiting for the lowly title. Accordingly, we turn our attention to one of the recent stalwarts among the EUR-crosses (and one of my favorite potential longs for 2014), the EURAUD. 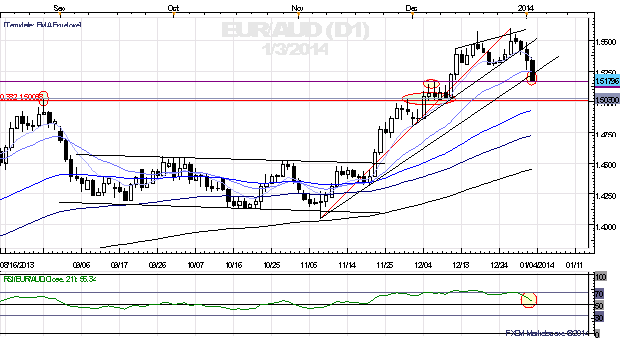 - Price has maintained an uptrend rooted in the November 7 and 20 lows, even as the more accelerated portion of the uptrend (November 21 to December 31) has tapered off.

- During the breakout period (November 21 to present), daily RSI (21) has maintained at least 50; momentum remains above 55 for now, suggesting that bulls might not have given up yet.

- As price remains above several longer-term moving averages (on daily and weekly timeframes), we are taking the tentative view that this is a pullback within a strong uptrend. A weekly close under 1.5005 (confirmed by daily RSI (21) below 50) would suggest a top.

There are no data on the Euro economic calendar for Friday, January 03, 2014.